NC teen takes leaps of faith on 'The Voice'

Britton Buchanan, son of Duke Energy employee, competes as one of the final 11

The biggest break in Britton Buchanan's career came the day he toppled from his bicycle.

Buchanan will compete as one of the last 11 contestants for the 2018 crown, which will be awarded May 22. The show's judges and online voters have kept him in play since the initial round of 48. 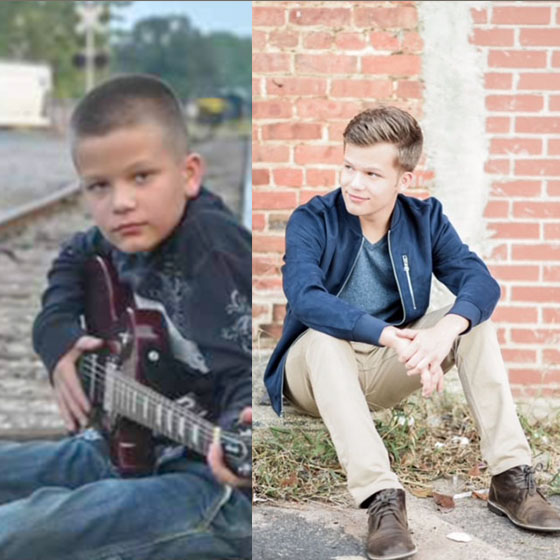 ​The Lee County (N.C.) High School senior, who turned 18 in January, performs with poise beyond his years and betrayed no nervousness as he sang for millions of viewers. The butterflies fluttered in the stomach of his dad, Todd Buchanan, a receipt inspector at Duke Energy's Harris Nuclear Plant in New Hill, N.C.

Todd Buchanan works in the receiving department to make sure deliveries meet the criteria of purchase orders and safety requirements. He's been a Duke Energy employee for nearly 15 years.

Though he and his family enjoyed music, the closest thing to performers in their DNA were Britton's great-aunts, who sometimes sang as a trio around North Carolina. So, Todd Buchanan said, "We tried sports first. He wasn't very athletic; when he played baseball, instead of paying attention to the game, he was in the outfield picking wildflowers to bring back to his mom."

At 8, Britton requested guitar lessons. At 10, he auditioned for "The Jungle Book" at Temple Theatre in his hometown of Sanford and won the lead role of Mowgli. Singing and playing came together, and that bike mishap sent him into a higher orbit.

"Now you didn't have to beg him to pick up his guitar; you had to beg him to put it down," said his dad. "If (musicians) came within a 100-mile radius, he had to go. We have seen Bruce Springsteen, Bob Dylan, John Prine, Willie Nelson, John Mellencamp, Paul McCartney. … He spends hours looking at concert videos, studying what they do onstage, how they interact with crowds."

Britton idolizes Springsteen. He writes his hero's mantra – "Faith will be rewarded" – on his arm before going onstage. As he told "Voice" viewers, "It encourages me to take leaps of faith I wouldn't otherwise. And without leaps of faith, we can't get anywhere."

He proved that motto in high school, going to New York for an open call for "The Voice." Though all the audition places were filled, he left contact information with a scout. She stumbled across his YouTube cover of Chris Stapleton's "Fire Away," recorded when he was 16, and invited him to an audition in Charleston, S.C. He passed the singing and personality interviews and flew to Los Angeles to audition for the show's producers.

Then he entered "the blinds," auditions where four judges – Kelly Clarkson, Alicia Keys, Adam Levine and Blake Shelton – sit with their backs to performers and vote only on the quality of their voices. Britton made that cut and joined 47 others on the air.

He now waits to see what opportunities come out of the experience. He has kept up with his studies while in Los Angeles, should graduate with his high school class and may go to Appalachian State University in the fall – or take college courses online if music intervenes.

"He's been blessed with a huge talent," said his dad. "But we're more proud that he's an all-around good kid. He gets As and Bs, never gets in trouble, is the kind who always sees the good in people. He gravitates toward the underdog, not the popular kids. I'm prouder of him for the kind of man he's becoming than the fact that he's on TV."