Meet Keith McGuinness: the ‘Coastie’ who learned about perseverance

As a college graduate in 1997, Keith McGuinness of Charlotte imagined the U.S. Coast Guard might be something like the TV show “Baywatch.” 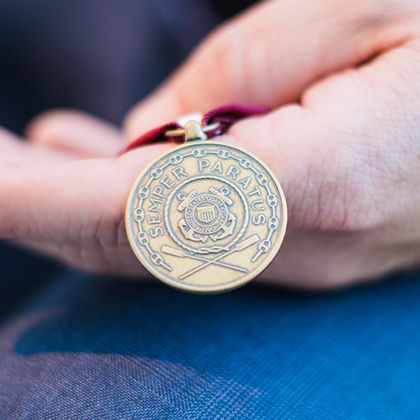 A boating enthusiast, McGuinness hoped he’d be stationed in sunny California or Miami Beach. Instead, he found himself in Kentucky on the Ohio River and in perpetually rainy Seattle. “That’s the military for you,” he said jokingly.

He patrolled ports for Homeland Security after the Sept. 11, 2001, attacks and patrolled the Bering Sea in Alaska, making sure the oceans weren’t overfished. He also performed search-and-rescue missions in those dangerous waters made famous by the Discovery Channel’s “Deadliest Catch.”

And when he worked in Alien Migration Interdiction, he encountered boats brimming with men, women and children bound for the United States. “We’d board boats meant for 15 people with 100 people crammed into them,” he said. “We’d ensure their safety, feed them and give them water while we waited for the State Department to negotiate with their home countries about next steps. It was very eye-opening for a 22-year-old.”

So what if McGuinness wasn’t a real-life Mitch Buchannon (David Hasselhoff’s “Baywatch” character)? He was doing purposeful work – just as his father, Richard, had done in the Air Force and his grandfather, Robert Cupp, had done in the Army.

Today, in McGuinness’ role as a transaction manager, he calls on skills he learned in the military.

“I learned to persevere and achieve a goal in challenging circumstances,” he said. “And the military taught me discipline. You have a chain of command, and you have to follow it. You learn how to work with a team made up of people from all backgrounds, races, religions, ethnicities. The military removes all perceived barriers.”