Meet Emily Simon, a Navy kid who joined the Marines

Emily Simon's father was an electrician and diver on the nuclear submarine the USS La Jolla in the 1980s. “I remember the ship as a young child and … the sound of us walking on metal floors and climbing the ladders.” 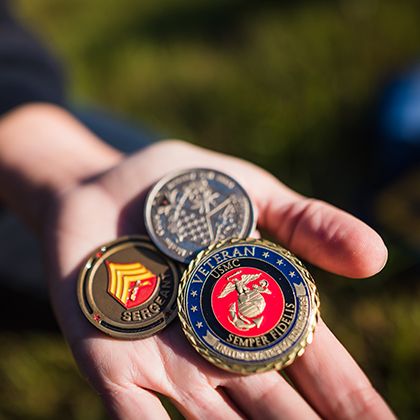 Simon, a hydro power engineer in Great Falls, S.C., understood it’s not just the service member who sacrifices − it’s the whole family. “There are stories of Dad’s long deployments and us kids not recognizing him when he came home,” she said.

Simon served in the Marine Corps from 1999 to 2004 as an avionics calibration technician in Yuma, Ariz. A part of the base rifle and pistol team, Simon was the No. 1 shot with a 9 mm pistol in 2003.

She sees similarities between Duke Energy and the military. For one thing, “both provide meaningful work,” she said. And because “there’s a procedure for everything in the military,” Duke Energy’s focus on process – and emphasis on proper documentation – is second nature to her.

Simon never went overseas or deployed, but her husband, Joel, did. (They met in Military Occupational Specialty school.)

The military taught her a lot – and not just about avionics. With a dual focus on personal achievement and teamwork, the military helps service people discover their strengths. “The military showed me I’m a little piece of something much bigger,” she said. “Sacrifices are sometimes needed on my part for the good of the team. But it also showed me what I’m capable of.”