In new children’s book, a girl and her talking dog take a journey through the world of nuclear power

Understanding the basics of nuclear power is child’s play, thanks to a new book that aims to make science and technology concepts fun for grade schoolers.

“Marie’s Electric Adventure” is a colorful story about a girl named Marie and her talking dog, Einstein, who wants to find out why her night light goes out. Marie and Einstein learn together how nuclear energy works and where her electricity comes from.

The self-published book, which is aimed at 6- to 8-year-olds, is the brainchild of the Duke Energy chapter of North American Young Generation in Nuclear (NAYGN). The chapter submitted a proposal for a children’s book in 2016 to the NAYGN Impact Initiative, which funds national projects that communicate the importance of nuclear energy. The group works to create interest and inspire young people about nuclear technology. The Duke Energy team received input from parents, teachers and other NAYGN members, and then wrote the book, using an illustrator from the publisher. 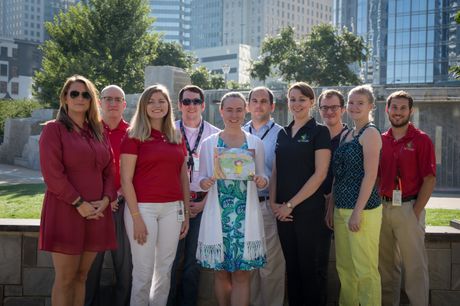 The Duke Energy NAYGN team that wrote the book.

Nuclear power, the only source that can generate carbon-free energy 24 hours a day, accounts for almost 20 percent of the energy generated in the United States and about 34 percent of Duke Energy’s output. Duke Energy has six nuclear power plants, three in North Carolina and three in South Carolina.

"The students really enjoyed it. They listened well and posed some really good questions.It is important that our students have a better understanding of nuclear energy since it is such an important aspect of our community," said Rachel Smith, librarian at Keowee Elementary in South Carolina.

“This book is a great resource that will help kids understand the concept of nuclear energy, how it is created and how the community can benefit from it,” said Amy Doyle, a second-grade teacher at Sharon Elementary School in Robbinsville, N.J.

The book will be distributed nationally through NAYGN, which includes more than 100 locations across the U.S. and Canada. NAYGN members will read the book in schools as part of Nuclear Science Week, Oct. 16-21. NAYGN also plans to donate copies to schools and libraries.

“I am so proud of the Duke Energy NAYGN members who teamed up to make this project a reality,” said Amanda Lang, chapter lead of the Duke Energy NAYGN chapter. “Writing a children’s book was a very different task than what we typically do on a daily basis. Although we were out of our element, we leaned on community members (family, friends and teachers) to make it a success – a true team effort.”

To get a copy

To bring “Marie’s Electric Adventure” to your community, email adventure@naygn.org. The book is available on Kindle, ibook and Amazon.