Erected in 1877, the lumber mill was a vital part of Covington, manufacturing the millwork that trimmed many of the city’s houses. Incorporated in 1815, Covington boasts elegant townhouses along the Licking River but suffered population decline after World War II. In 2001, the Hellmann family sold the business and closed its Covington operation.

The 14,000-square-foot building became a hardware store for a few years. Then, for a decade, it stood vacant, a symbol of lost manufacturing and urban decay in this town at the confluence of the Licking and Ohio rivers, just south of Cincinnati.

But today, the structure has a new name, the Hellmann Creative Center, and a new life with studios for artists, event space and offices. Covington’s Center for Great Neighborhoods led the redevelopment – and relocated its own offices to the building – with funding from several sources, including an urban revitalization grant from the Duke Energy Foundation.

The foundation launched its urban revitalization grants program in 2011 to help communities trying to recover from the recession, said Duke Energy Foundation manager Casey Ruschman. “We recognized the struggling economy, and thought it was a good time to increase our investments in urban neighborhoods.” 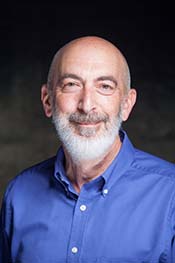 Since then, the foundation has given nearly $1.6 million in urban revitalization grants to 48 projects in Greater Cincinnati. The impact often continues long after completion, Ruschman said, as one project becomes a catalyst for more redevelopment.

In 2015, the foundation gave $35,000 to the nonprofit Center for Great Neighborhoods, which has worked for 40 years to improve Covington’s Westside neighborhood, building affordable housing and developing a reinvestment strategy for depressed areas. The center used the money to investigate whether to renovate the Hellmann building.

Bringing the structure back to life was important, said Tom DiBello, the center’s executive director, because it occupies a visually prominent location on a major corridor, 12th Street/Martin Luther King Jr. Boulevard. When the state widened the corridor recently, it moved two buildings. Suddenly, the deteriorating Hellmann became more noticeable than ever, DiBello said. “We looked at this building and said, ‘We should acquire this.’” The center bought it at public auction for $36,500.

The Duke Energy Foundation’s grant was just one part of the $2.2 million project, but it came at a crucial time, DiBello said, allowing the center to decide what renovations were feasible. These kind of revitalization projects are often costlier than new construction, he said, so “for Duke Energy to look at cities and reinvest in the inner city is a big deal.” 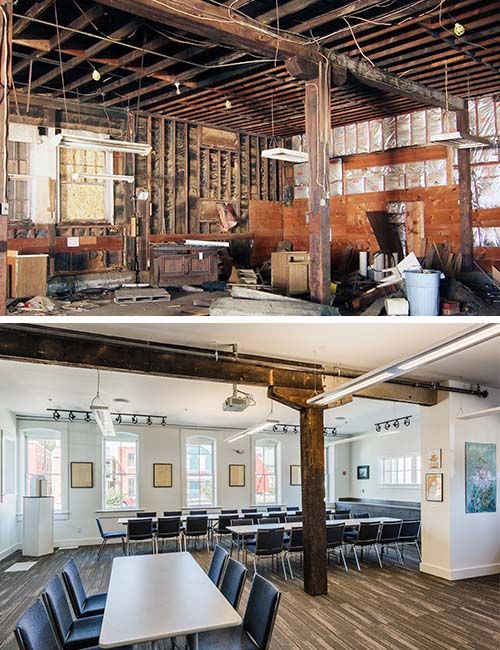 Construction began in September 2015. In September 2016, more than 600 guests attended the Hellmann Creative Center’s grand opening. The building now has eight studios on its first floor and the center’s offices on its second floor, along with two large spaces for community events, which the center rents to groups for a nominal fee. Six studios are now leased. Tenants include the Carnegie Arts Center, located several blocks away, which uses the Hellmann space to build staging for plays and other productions.

The building was recently placed on the National Register of Historic Places. It retains its industrial character, with exposed ductwork and rafters and a massive steel tank on the roof that once pulled sawdust from the interior. Its brick exterior still displays a fading painted sign that advertised the Hellmann company’s products – lumber, millwork, plywood, wall board. “Steampunk” is how The Cincinnati Enquirer described its look.

DiBello envisions the Hellmann Creative Center as a hub, “a center for creativity and for engagement,” that brings together citizens in this city of 40,000 for varied reasons – art lessons, community discussions, business meetings.

As a bonus, the project seems likely to spur more redevelopment. Traffic has picked up at a nearby deli and bar, and people are asking about starting businesses in the area, DiBello said.

“Already, I can tell you, there’s a kind of buzz about it,” he said. “We’ve kind of set the stage. The area’s starting to percolate.”

The Duke Energy Foundation recently awarded nearly $240,000 to kick-start 10 urban redevelopment projects in Ohio and Kentucky. Since it debuted in 2011, the foundation has given out nearly $1.6 million to 48 initiatives in the Greater Cincinnati area. This year’s 10 grants are: