People who sit in highway or interstate traffic during their commutes are going to be envious of Lynnsie McManus.

During her one-hour, 40-minute roundtrip commute, she often closes her eyes and falls asleep. (Don’t try this if you’re the driver!) Or, she may talk to her fellow Charlotte Area Transit System (CATS) vanpool riders. Some of them have been taking the vanpool together for seven years, and they’ve become friends. 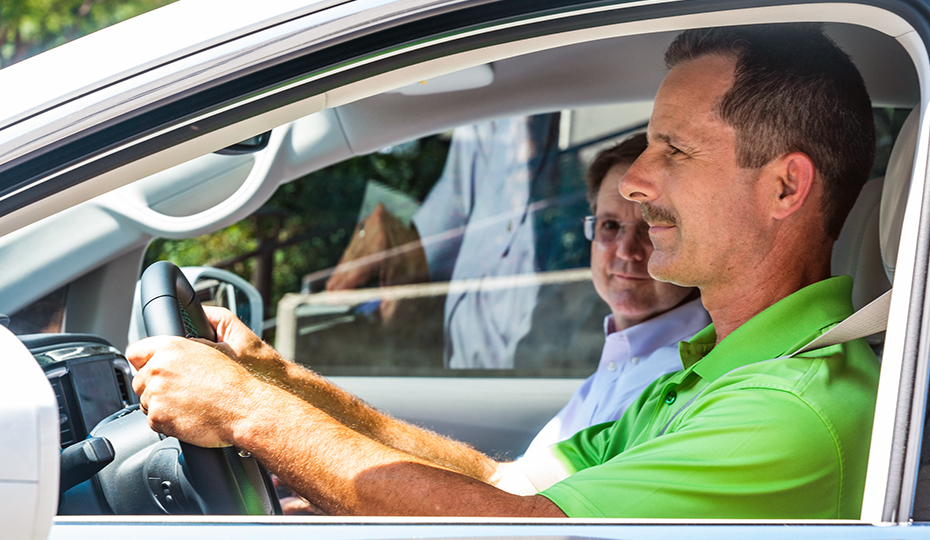 But she rarely checks her phone and is grateful for the time away from the device.

When Duke Energy and CATS embarked on a year-long electric vanpool pilot program in May, McManus and her fellow commuters in Denver, N.C., became part of it. There are five of them; four work at Duke Energy, and McManus works at HDR, an engineering and architecture firm near the Duke Energy Center in uptown Charlotte.

“I love the power of it, the feel of it,” she said about the electric van. “Before I became part of this, I didn’t see electric as a viable option. But we began in early June, and we’re only on our second tank of gas in mid-August.” Gas is included in the monthly fee the commuters pay CATS.

McManus may have been a skeptic, but Marshall Rand, the Duke Energy project manager/analyst assigned to manage the pilot, is an evangelist for electric cars. 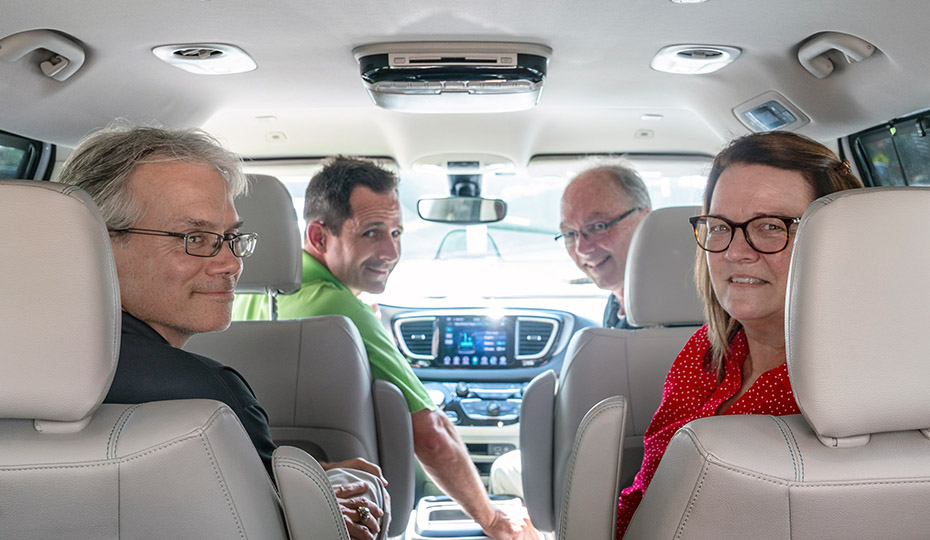 He drives one himself – a Mitsubishi Outlander plug-in hybrid – and said he’ll never go back to a gasoline-powered one. His wife drives an electric Tesla Model 3.

Lang Reynolds, Rand’s manager on the electrification team in Charlotte, had the idea for a pilot, which uses two hybrid-electric Chrysler Pacifica vans – each seating four to five commuters. The pilot will continue for a year while Rand collects data on cost savings and performance. CATS officials will review the data at the end of the pilot, he said.

“CATS continues to explore ways to create a more sustainable vehicle fleet across our entire system,” said CATS CEO John Lewis. “This is an opportunity for us to provide a service while evaluating new transit technology to work toward our sustainability goals.”

CATS’ fleet has only combustion engine-powered vehicles. The city of Charlotte has a goal of eliminating carbon emissions by 2030. Lewis told the Charlotte City Council in August he wants to buy 12 to 16 electric hybrid buses instead of diesels. Greensboro and Raleigh in North Carolina are switching to electric buses, and Charlotte-Douglas International Airport is switching to electric shuttle buses.

“Charlotte has aggressive goals when it comes to carbon emissions reduction, and we are setting the example for the community to follow to get to below 2 tons of CO2 equivalent per person per year by 2050,” said Erika Ruane, the city’s sustainability coordinator. “These zero-emission vehicles encourage people to … consider them for their next vehicle purchase. They lower our emissions and save us money in fuel and maintenance costs.”

The Duke Energy vans go 30 to 35 miles on electricity before the gasoline engine turns on. Each gets an average of 80miles per gallon and results in monthly fuel savings of about $80. That equates to less than half the fuel costs of a gas-only van. 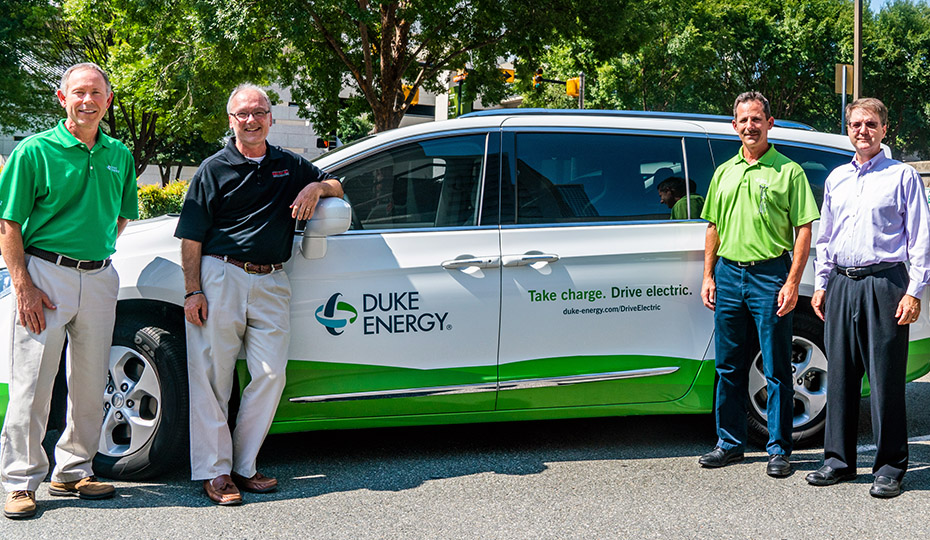 In addition to fuel savings, Duke Energy gets a federal tax credit of up to $7,500 for each electric vehicle it buys. The company bought the two vans.

Until his retirement, Dean Helton, accounting manager for Duke Energy Carolinas, was another member of the pilot. He liked having good company during the commute and not having to drive every day. When he was in the gas-powered Ford Explorer – part of the CATS fleet – they used to have to fill up the gas tank every eight days. Now, the commuters go about two months on a single tank.

“The pickup is good,” he said of the Pacifica vans. “And they’re roomier. This is not a stressful commute like I used to have when I was driving myself.”

Alan Hutcherson, lead ethics and compliance analyst in Charlotte, is participating in the pilot. He’s the primary driver of one of the vans; all members of the pilot are authorized to drive.

Hutcherson has tried different ways of commuting – from driving himself to carpooling to taking the bus. He’s also taken the vanpool before – the gasoline-powered one. (Duke Energy employees and other uptown workers have had the option of participating in the CATS vanpool for several years.)

Another small, but noticeable, benefit to electric vehicles? They’re quieter than their gas-powered cousins. “People often ask, ‘Is this car on?’” said Rand, who doesn’t need to convince the pilot program commuters about the benefits of electric. They’re already on board.