It whirs. It spins. The PiBotics robot can pull itself up

How did this robot from Kentucky perform in the FIRST Robotics Competition?

How do you increase high school students’ interest in technology and innovation? Fun and games, of course. So 30 students from four high schools in Northern Kentucky teamed up to build a robot to compete in the FIRST Robotics Competition. Duke Energy supported the program through a grant. Here are the vitals:

The challenge: Build a game-playing robot in six weeks. 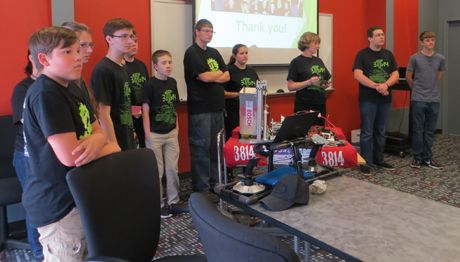 The goal: Win the FIRST Robotics Competition. FIRST (For Inspiration and Recognition of Science and Technology) is a nonprofit that designs programs to motivate young people to pursue science, technology, engineering and math (STEM) opportunities.

The benefits: Increase interest in technology and innovation.

The process: Collaboration is the foundation for success – each student has a role in the 20 functions that must be integrated, from drafting to wiring to programming to rules expert to marketing and communications. 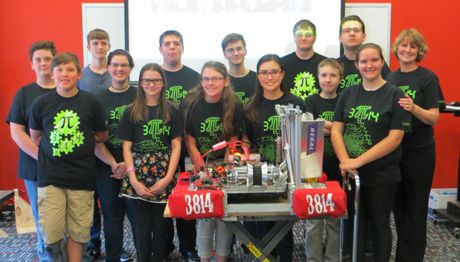 The competition: The robot had to navigate across a 27-by-54-foot field to collect gears and place them on an airship pin. The PiBotics robot was part of a three-bot alliance competing against three other rovers. Then the robot had to climb a rope to earn extra points.

Quoting: “The team is like a workplace to me. You are on a time frame and have to learn how to get outside your comfort zone,” said team captain Katie Wells. “Everyone has different opinions, but you have to figure out the one way to incorporate it into one robot.”

The team was assigned the number 3814 by FIRST Robotics. One of the students realized the number would be the value of pi (the ratio of a circle's circumference to its diameter) if the 8 was not there. Therefore, the 8 is shown smaller, like a decimal point (3814), making the number read as pi – PiBotics.

Robotics is one of other hands-on STEM projects at Boone County schools.

Students from Ockerman Middle School’s Energy Club focused on energy used at home and at school. With the help of advisors and a $100,000 grant from Duke Energy, they built a stationary “energy bike” to show how energy can be saved by using LED bulbs rather than CFL bulbs.

At “Evening with the Arts,” people that rode the bike could light up LED bulbs without much effort because of the small amount of energy it took. But only some could pedal fast enough to light the CFL bulb.

“Skills the students are learning are relevant to our work environment,” said Rhonda Whitaker, Duke Energy community relations manager. “Careers at Duke Energy are related to STEM subjects. And skills such as teamwork, problem solving and communications are critical.”