A collection of mementos in Shelby, N.C., celebrates the heroic efforts of linemen

Tucked down a side street in Shelby, N.C., a town about 45 miles west of Charlotte, sits a treasure trove chronicling the history of one of the most dangerous and often-overlooked professions. The International Lineman Museum and Hall of Fame might not be well known, but its inductees are responsible for the power the world relies on daily.

Some names are easily recognizable, like Nikola Tesla, credited with inventing the modern electric system, and Thomas Edison, who invented the lightbulb. But others risked their lives with little fanfare, like early lineman Chet Coon, who invented and tested the first hot stick, an insulated pole now widely used to protect line workers from electric shock.

“These sticks and things you see hanging on the wall? Somebody sometime took either those sticks or a piece of PVC pipe and stuck it on the line to see if they could use it as a tool,” said Mitch Hutchins, museum board member. “That’s nervy.”

Andy Price and Murray Walker, two salesmen for American Safety Utility Corp., a provider of lineman tools and safety equipment, established the museum in 1997. The memorabilia collection occupies the top floor of the company. Price and Walker, who were inducted to the Lineman Hall of Fame this year, noticed the amount of old equipment utilities threw away and started a collection that would originally fit in a trailer as a traveling display for lineman rodeos.

Now the collection fills the second story from wall to wall and floor to ceiling, and Hutchins said the museum isn’t big enough for half of what they have collected from donors. With a grant from the Duke Energy Foundation, the museum is studying the feasibility of moving to a larger location.

In addition to the extensive collection of hot sticks, visitors can see a case of early telephones as a nod to telephone linemen; many variations of Reddy Kilowatt, a cartoon widely known from his appearances in utility campaigns and logos across the country; a 1934 Duke Power pickup truck used for line work; and glass insulators. (One insulator on display is made from a Coca-Cola bottle. It was in Vietnam during the war when military linemen had to string power lines in rural areas.)

Hutchins, who has worked for Duke Energy for nearly 30 years as a lineman, lineman trainer and now distribution construction and maintenance supervisor, said he’s glad the museum is able to preserve the evolution. 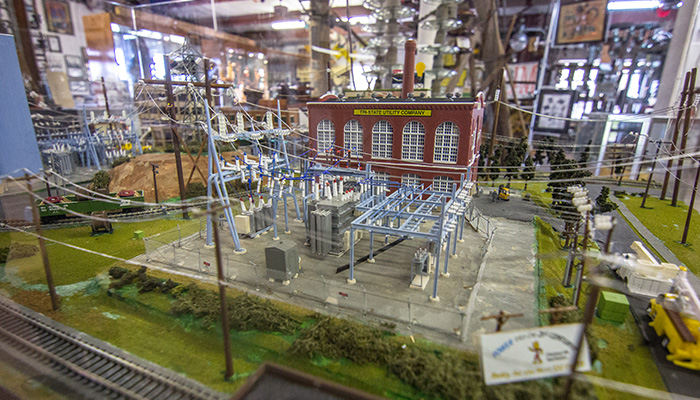 “Safety was important, but not like it is today,” Hutchins said. “I was one of the first people to try the fall-protection harnesses close to 20 years ago, and now everybody wears the harness.”

Half of linemen lost their lives on the job at the turn of the 20th century compared to less than 1 percent today, according to a sign at the museum.

Hutchins said sometimes it’s harder to be a lineman’s wife than a lineman.

“I’ve left my house for seven days straight with no power to put somebody else’s power on. Linemen want to turn the lights on,” he said.

It was established In 2006, to pay tribute to those lineman who continually exceed in the call of duty and exemplify those qualities that establish the true nature of the brotherhood of electrical lineman.

Even with the challenges of being a lineman, Hutchins said he would do it all over again.

“It’s hard, but it’s fun. I’ll never forget the time there was a whole family staying in a car because they didn’t have electricity in their house, and we turned the power back on for them,” he said. “We’re doing a job that means something. Other jobs mean something too, but when the electricity goes off, people’s lives change – when you can change it back to normal, that means something.”