In high school, Linda Neenan’s guidance counselor dashed her dream to attend General Motors Institute to study engineering when she told her it wasn’t for girls, and Neenan never forgot about it.

Instead, she became a math teacher and has removed barriers for students ever since. After noticing the United States was lagging in international rankings in math and science education, she founded iSPACE, a nonprofit that educates students and teachers about science, technology, engineering and math. 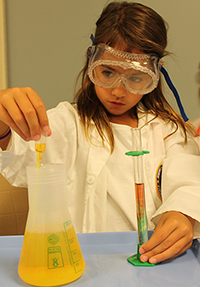 A young girl participates in a science experiment at iSPACE.

In a recent study, the Programme for International Student Assessment ranked the United States 27th in math and 22nd in science performance among 34 countries. iSPACE, founded in 2001 in Cincinnati, is one of a number of organizations funded by the Duke Energy Foundation to improve those rankings by training teachers and encouraging students to pursue careers in STEM fields.

Since 2015, the Duke Energy Foundation has donated $7.5 million to 320 STEM-related programs in its six-state territory. Programs such as the Youth Energy Academy in Florida and the Duke Energy Academy at Purdue University give students a chance to explore careers in the energy industry and have hands-on science experiences during the summer. 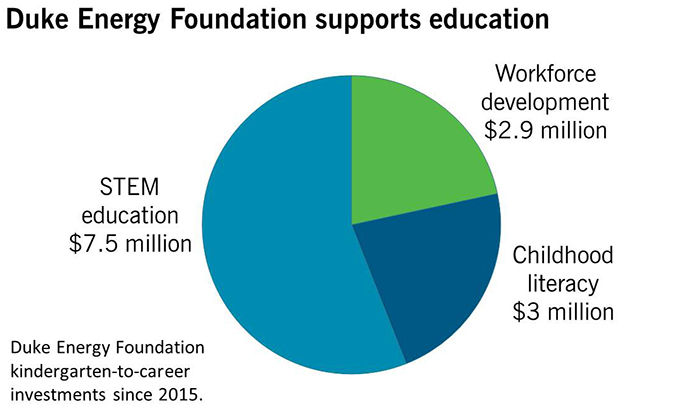 “These programs can really make a difference in terms of piquing a young person’s curiosity around STEM and having a better understanding of how it can lead to an exciting job,” Heath said.

As the energy industry modernizes the electric grid and implements new technologies, Heath said he thinks there will be an even greater demand for community college and university-level graduates with STEM skills.

“Having STEM skills will be of increasing importance to the workforce of the future,” Heath said, “which is why we are so focused on charitable giving to STEM education.”

Last year, iSPACE served more than 30,000 and expects to grow. Educators develop the curriculum based on state standards for pre-K to 12th-grade teachers. For elementary teachers who might not have a background in science but have to teach the topics, Neenan said the lessons and training are helpful.

“We’ve had teachers say they had no idea how to teach science until they came to our programs,” Neenan said. “When a fifth-grade teacher is asked to teach force of motion, they panic. They pick up the textbook and don’t let go, but reading Chapter 7 and answering the questions at the back of the book is not the way to teach science.”

A lesson about paper airplanes is a favorite at iSPACE because it can be adapted to teach all age groups. For instance, the plane is launched 150 feet into the air, and younger children learn about how air has pressure that can blow up balloons or lift planes. Older students learn about more complex topics like aerodynamics, drag and gravity.

Neenan said she has seen many of her students go on to work in STEM careers and that makes the program worth it.

“We can never put up obstacles for kids aspiring to do anything they want,” Neenan said. “I was kind of cut off at the knees, and I wanted to make sure that kids understood there was somebody, something, to support them in achieving their aspirations.”

Slideshow: Teachers wade through the ecosystem