How to preserve a fisherman's paradise

There's great fishing at Harris Lake in North Carolina thanks to Duke Energy biologists, who maintain the health of lakes near power plants

Harris Lake is nestled near the Harris Nuclear Plant southwest of Raleigh, N.C., and home to some of the best fishing in North Carolina.

On any given day, you can find fishermen with creels full of bass, crappie and other warm-water game fish.

One of the reasons for such a healthy fish population is the care the lake gets from Duke Energy biologists.

Duke Energy manages shoreline and lakes in six states with a team of 23 environmental scientists to ensure natural habitats remain safe for fish, birds, animals – and the people in the community. Some of those lakes are prized among sportsmen for their recreational opportunities.

In fact, gameandfishmag.com refers to Harris, which was constructed in the 1970s to provide water to the nuclear plant’s cooling tower, as a “crackerjack bass-fishing lake.” The average size of bass ranges from 2 to 4 pounds, although biologists have collected and released bass as large as 14 pounds. 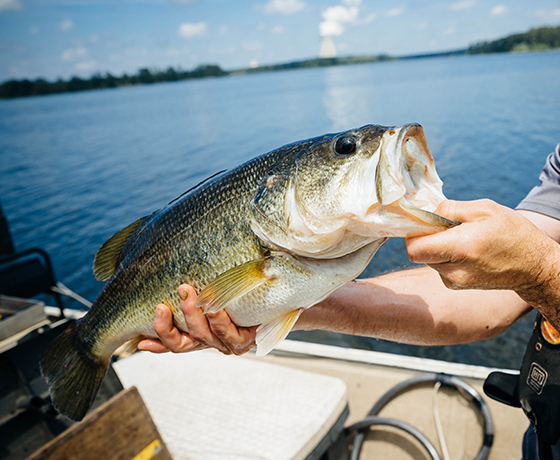 Checking out a largemouth bass.

“Harris is one of the best largemouth bass fishing lakes in North Carolina,” said Kirk Rundle, a state fisheries biologist. “Our samples consistently show above-average catch rates, fish that are robust or plump for their respective lengths and a relatively large abundance of larger fish.”

One of the reasons for such a healthy fish population, said Duke Energy biologist Tom Thompson, is simply the lake’s physical properties. Thompson ought to know. He has spent years motoring around the lake on a boat monitoring fish.

“Harris Lake has little to no shoreline development,” said Thompson, “and the perfect balance of nutrients and aquatic vegetation.”

Rundle, however, credits the work of Duke Energy’s biologists in maintaining the healthy fish population, in other words, helping to keep that balance of nutrients and vegetation.

“Duke Energy’s environmental scientists collect all fish species and sample large amounts of water quality and chemistry data,” said Rundle, “and they have a broader focus on all species and collect much more water quality data than we do at the North Carolina Wildlife Resources Commission.”

Fish sampling is conducted with boat electrofishing at various locations. Duke Energy biologists use an electric field to stun fish, which are then netted and placed in a holding tank, where they are identified, counted, measured, weighed and inspected for diseases and deformities. Fish are then gently released unharmed back into the lake. 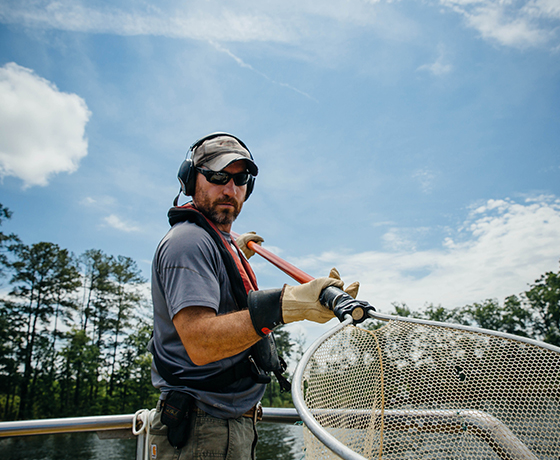 Biologists also collect water samples, monitoring temperature and dissolved oxygen levels – water with low levels of dissolved oxygen can indicate such issues as excessive algae growth, which can harm fish. They also keep a watchful eye out for invasive species such as non-native fish.

Another concern for biologists is hydrilla, an invasive aquatic plant. While hydrilla creates habitate, it spreads quickly and can eliminate native vegetation. The company works with state agencies and stakeholders to identify and manage hydrilla at each of its waterbodies.

For Thompson, education is an important part of his job as well. “We work hard to inform people not to release other species into the lake, such as spotted bass, which are competitive with native largemouth bass.”

“Harris Lake has a very balanced ecosystem,” Thompson said, “and we want to make sure that it stays that way.”

As with Harris Lake activities, Duke monitors water quality conditions important for fish survival (dissolved oxygen and temperature) in several lakes across the Carolinas. While natural processes affect these parameters, Duke can make adjustments at its hydroelectric plants to increase dissolved oxygen levels and reduce the effect on fish.

Duke has also installed significant modifications to minimize potential impact on aquatic species surrounding the Brunswick Nuclear Station near Southport, NC. Impacts due to operation of the station have been reduced by as much as 90-95% depending on species, including threatened and endangered species such as sea turtles and sturgeon.

The Crystal River Mariculture Center is a two-story, 8,100 square-foot multi-species hatchery that cultivates and releases approximately 100,000 fish fingerlings, including red fish and spotted sea trout, into the Gulf of Mexico each year. Built in 1991, the center has cultivated and released more than 3.6 million fish and crustaceans, becoming one of the most successful marine-stocking programs in Florida.

Aquatic species protection is an important part of our stewardship programs in Florida. Manatees and sea turtles are observed when near our facilities and information about their condition and health is recorded and shared with state and federal resource agencies. Duke Energy participates in rescues of these species and supports their rehabilitation and return to health.

Environmental stewardship involving aquatic resources takes several forms in the Midwest. We routinely monitor water quality, fish and other aquatic organisms in the waterbodies used for cooling water at our plants. Our Cayuga, Ind., plant sponsors annual wetlands and eagle viewing days, inviting the public to learn about aquatic and natural resources issues. We maintain habitat for the endangered Interior Least Tern near Gibson station in Indiana, to provide water and land for this species in a protected area away from the plant.