For firefighters at the Charlotte Fire Department, not every day is routine. Not every call is easy to let go of. An aggressive fire or a traumatic accident can leave team members feeling heavy.

On days like that, the team heads back to the station, gets cleaned up, has something to eat and circles up around the kitchen table to decompress. That’s when Lady Katherine joins them. 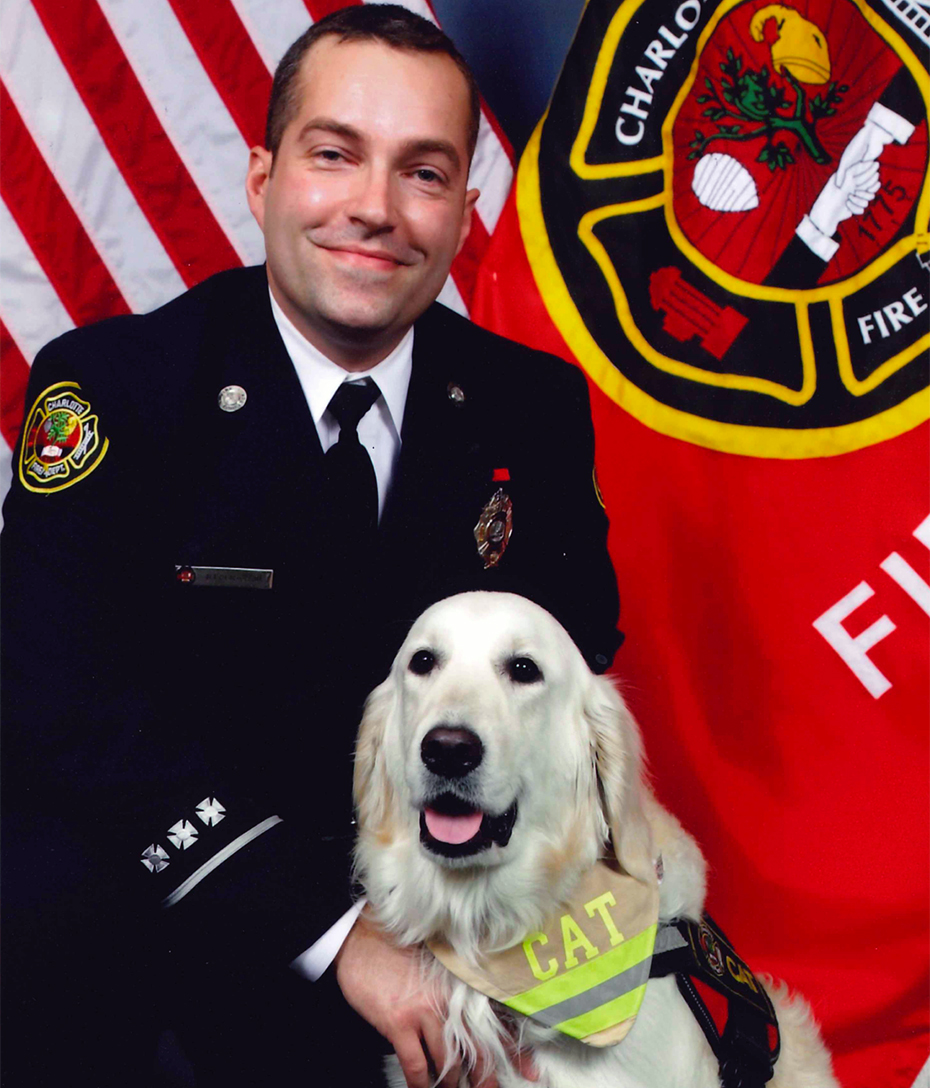 She starts to make her way around the room. She pokes her nose in to check on people.

“She doesn’t understand the different roles people play, but she can smell their cortisol, their stress hormone,” said Rick Dunton, her handler. “She’ll sit down next to the person who needs her, she’ll relax with that person a little while, then she’ll move around the circle again.”

She’s there to work alongside the department’s peer support team. At least two people from that team are dispatched to provide support for the firefighters, and others, like telecommunicators.

“If there’s a significant event where the team’s adrenaline is up, their blood pressure is up, their heart rate is up, petting a calm, well-trained dog like Cat can actually help bring these levels down,” Dunton said. “There is an actual medical benefit to having her around for that, to help relieve some of that tension.

“Even if they don’t feel like talking about what just happened, even if they’re not ready to start processing, we can use the dogs to help release some oxytocin, some dopamine, some serotonin – all the feel-good hormones that can cut down the cortisol. Cortisol has its place, but when you’re carrying that around, it can have a lot of negative health effects.”

Cat was the first dog to join the team when the department’s Office of Public Information and Community Engagement established a K-9 program in 2020. She was donated by the K-9 Caring Angels Therapy Dogs in Virginia and named after one of their late volunteers. 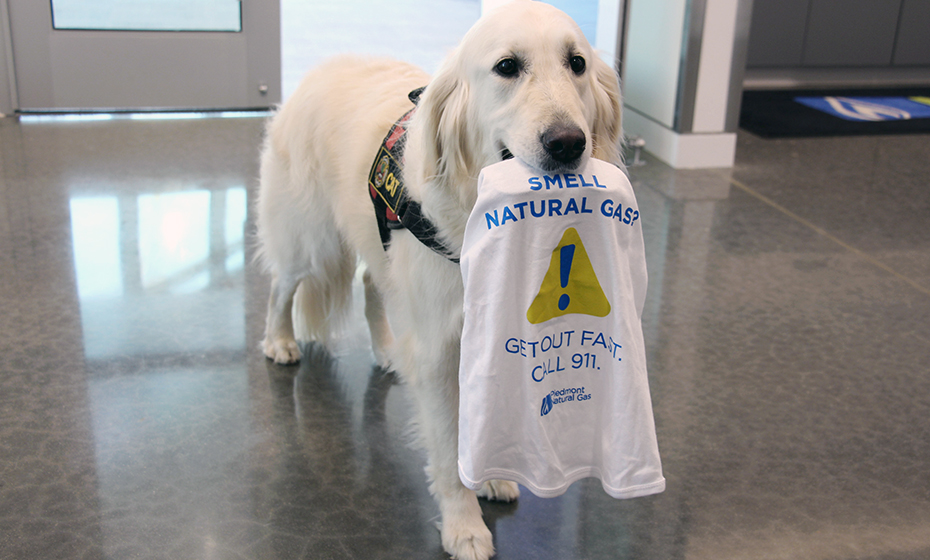 As a fire and life safety educator who was certified in peer support, Dunton was selected to be Cat’s primary handler. He drove to Virginia to pick her up when she was an 18-week-old puppy.

“It was absolutely love at first sight,” he said. “You could tell even then she wasn’t a normal dog – she was already trained so well, she knew she couldn’t just run over and jump all over us like puppies do. Then the vest and leash came off, she heard the word ‘break!’ and a switch flipped. She got to be the puppy and play.”

When she’s on the clock, Cat’s all about work.

She goes around town with Dunton to community events and education programs in addition to offering peer support to station members. She helps with the fire and life safety education program, which reaches residents, businesses and every third-grade classroom in the city.

“She comes into the classrooms, and she demonstrates how low to the ground to be during a fire, how to stop, drop and roll, and how to reach out and touch a door (which shows how close a fire is),” Dunton said.

Thanks to Cat’s hard work, the K-9 program has been able to expand to include a second dog, Phoenix, and to attract donations and sponsorships to strengthen the program. Piedmont Natural Gas just announced their sponsorship of the K-9 program in June. 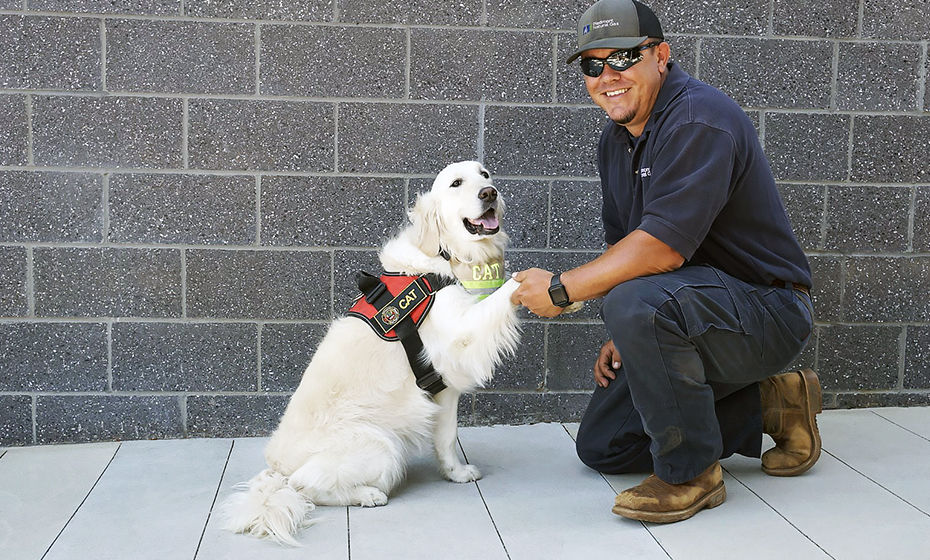 “The Charlotte Fire Department is a critical part of our community and continually on the front lines when emergencies occur,” said Sasha Weintraub, Piedmont Natural Gas senior vice president and president. “Sponsoring the K-9 program to help relieve stress due to on-the-job challenges and spreading the important message of fire prevention and safety is a small way we can give back.”

“Piedmont was thrilled for the opportunity to incorporate Lady Katherine into our efforts to educate communities on how to recognize the smell of natural gas and how to stay safe,” said Barbara Ashford, Piedmont’s director of community relations. “Cat not only helps to reduce stress for first responders, but she also plays a vital role in public education programs. Cat the dog is a perfect fit for increasing awareness of natural gas safety on behalf of Piedmont.”

Cat will also help Dunton transition into his new fire inspector role. Cat will join some inspections to spark engagement with business owners. Dunton hopes to see her interacting with community members along the way.

“Even if you’re in uniform, when you have a dog, everyone wants to talk to you,” he said. “They want to know what’s up with that dog. And then they start talking about their dog. And then with a little verbal jiu jitsu, we’re talking about fire safety and what they do at home.”

When Cat is at home with Dunton, she’s finally off duty. The minor celebrity and fire safety expert turns into a puppy again. She romps with her roommate, Mini, Dunton’s American Mastiff, she goes for dips in the pool and she chases balls.

“We still have to let her be a dog,” Dunton said. “She is so disciplined and dialed in and concerned about other people. But sometimes we’ve just got to take a break and play.”

Interested in supporting the Charlotte Fire Department’s K-9 program so dogs like Cat can continue to support the team and the community? Donate to the Fire Prevention Foundation of Charlotte and label the donation “K-9 Program.”