For this colonel, purpose is the secret to success

Cristina Moore’s life is an example of how purpose can be the motivation to achieve lofty goals. 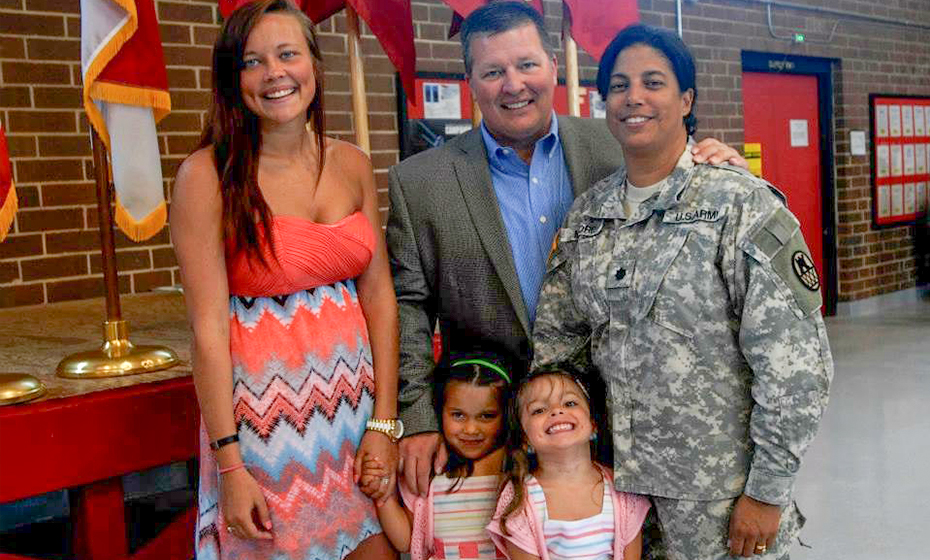 She is married to a fellow Army engineer, mother to 8-year-old twins, a 23-year-old daughter and a 26-year-old son. With her husband, she runs Bronze Star Homes, a company that builds modular ramps, additions and homes for veterans. Her full-time job is at Duke Energy, where she is solving problems and improving service for customers.

As if that weren’t enough, Col. Cristina Moore is the first female brigade commander of the North Carolina National Guard’s 130th Maneuver Enhancement Brigade, where she’s responsible for 3,000 soldiers.

Somehow, even with all these responsibilities, she is remarkably attentive, responding to emails, answering calls from her soldiers and even finding time to do a television interview.

In yesterday's episode of Lifetime Network’s "Military Makeover" series, Moore talked about her experience working at Duke Energy and how it’s helped her balance her responsibilities as a mother, wife, business owner and soldier. The company’s support for reservists is why the Department of Defense recently honored Duke Energy with its 2018 Freedom Award.

The television interview was filmed where she spends most of her time at Duke Energy, the Little Rock Operations Center near Charlotte’s airport. 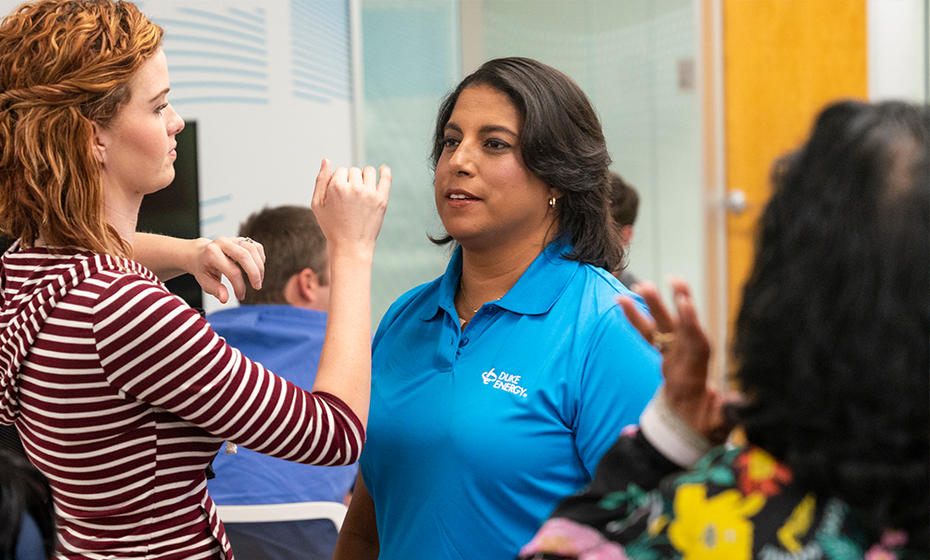 Moore’s mother, Christina Echevarria, looks on as Moore prepares for her interview with Lifetime.

Her mother, Cristina Echevarria, happened to be visiting from Germany where she is head of administration for military base schools in Hohenfels, so she had the opportunity to watch her daughter’s interview.

Echevarria said she always knew her daughter would go into the military. From a young age, she said, Moore was a strong leader who was always helping and counseling her friends. Moore said she felt the call to serve as early as she can remember, too. Many of her family members who had the same call, including her mother, worked as teachers.

Moore was born in Puerto Rico and moved with her family to the mainland when she was 5. She spent her childhood in Mt. Juliet, Tenn., watching military movies like “The Big Red One” and “Hamburger Hill” and listening to relatives talk about the challenges of their generation – crises like World War II and triumphs like landing on the moon. She was inspired by the nation’s ability to come together to solve problems for the greater good. That inspiration stayed with her for the rest of her life. 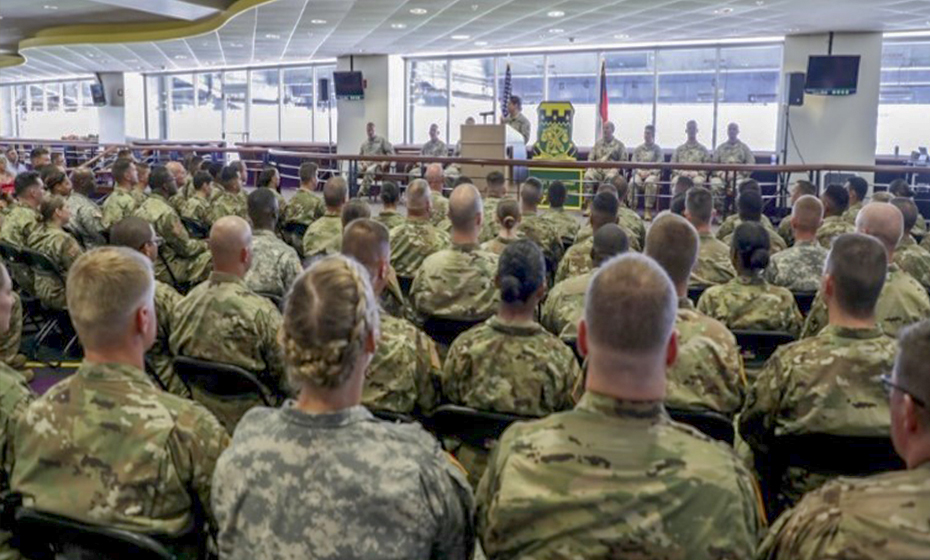 Moore speaks to a group of soldiers from 514th MP Company from Winterville, N.C., before their deployment to Guantanamo Bay, Cuba, in August. Photo credit: North Carolina National Guard.

Before Moore was a teenager, her purpose was clear. She wanted to be a soldier.

At the family dinner table when she was in sixth grade, Moore announced that she wanted not only to join the military but to attend the United States Air Force Academy. Her mother, a bit worried, joked that she wanted to put her daughter in the convent to avoid this career, but she supported her decision.

Moore’s guidance counselor didn’t have information on how to prepare for the military academies’ rigorous application process, so Moore did her own research. She would need community service, leadership experience, athletic potential and, lastly, a congressional recommendation.

She joined clubs and started running track to build her resume. The summer of her junior year, she visited the Air Force Academy in Colorado. She wanted to be an aerospace engineer, and she marveled at the monuments of jets on campus. 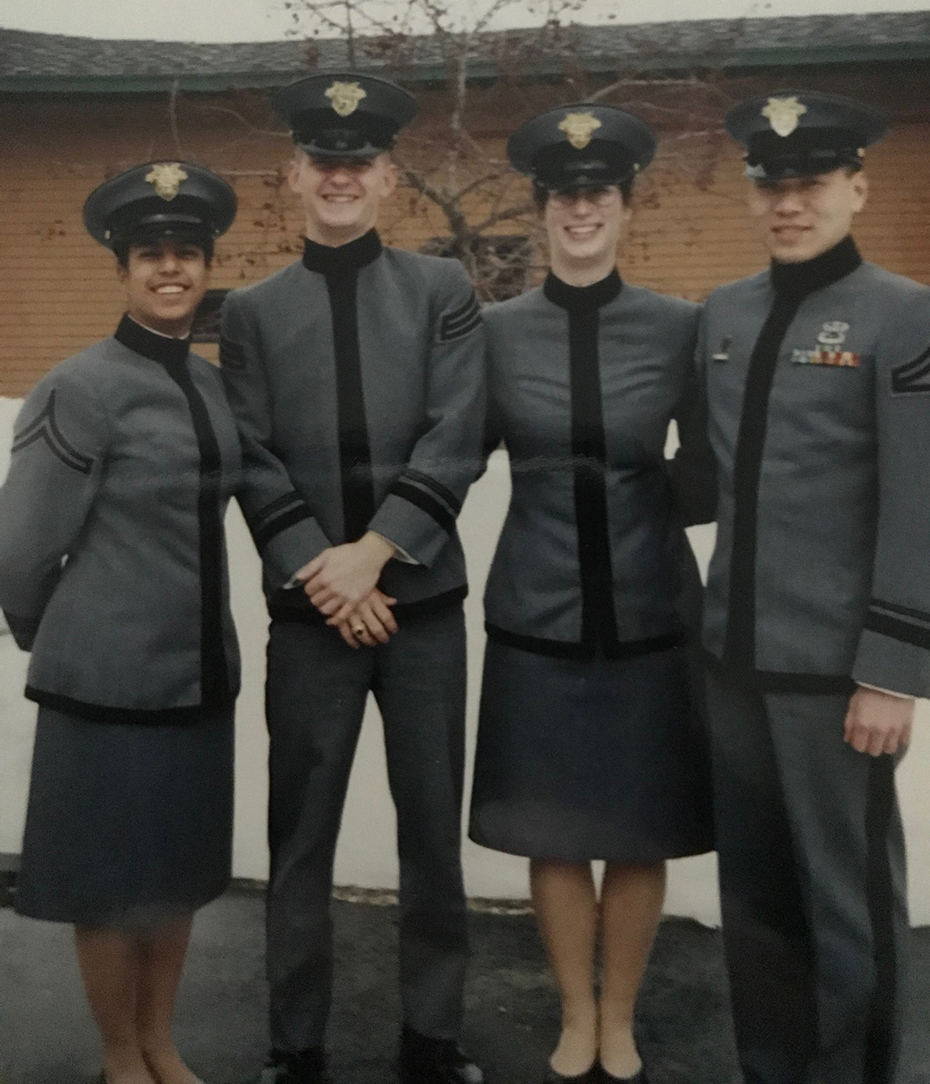 Moore with her classmates at West Point during sophomore year.

But a visit to the United States Military Academy in West Point, N.Y., was a reminder of her purpose. Instead of jets, West Point’s monuments are dedicated to some of the nation’s leaders: Dwight Eisenhower, George Patton and Douglas MacArthur.

The following school year, she earned congressional recommendations to three military academies, including one from then-Sen. Al Gore of Tennessee. She was accepted to all three schools and attended West Point, where she majored in Russian and minored in mechanical engineering.

After graduation, she served as an engineer in the Army until 2000, when she joined the National Guard. Her engineering responsibilities included everything from building schools and roads to clearing explosives during combat. She served overseas first as an engineer at Camp Castle, a base on the northern border of South Korea. She returned to the United States in 1997 and stationed until 2000 with the Military District of Washington Engineers in Fort Belvoir, Va., a search and rescue team that would eventually respond after the Sept. 11, 2001, attacks on the Pentagon. 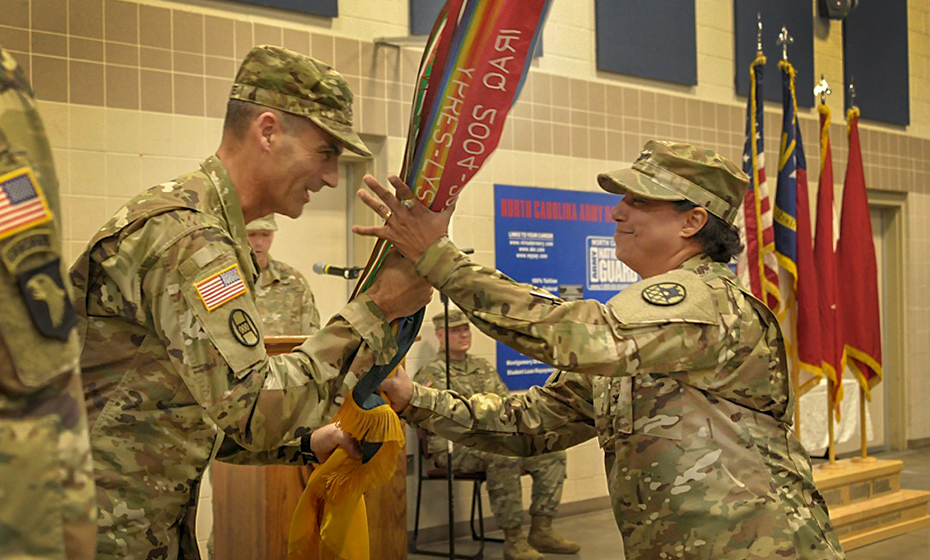 Even though Moore wasn’t part of the unit during the attacks, she and her husband, Robert, packed their search-and-rescue gear and drove 10 hours from North Carolina to New York City to respond as volunteers. Moore and her husband used their engineering experience to do structural assessments before sending in rescue teams.

“It was just all hands on deck trying to get done what we could. I think it goes back to when I was in sixth grade,” she said. “You just know that’s what you’re supposed to do.” 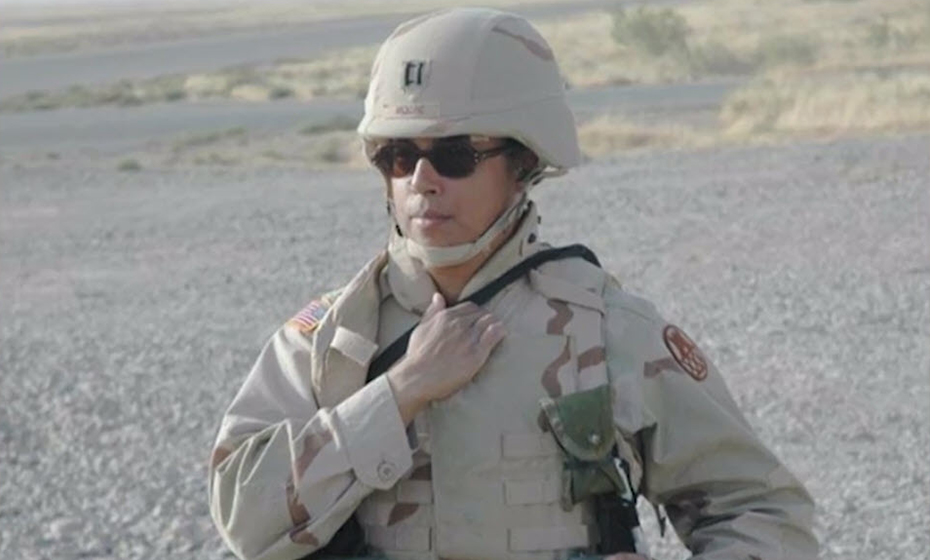 Moore during her deployment to Iraq in 2004.

All the while, Moore was climbing the ranks in the National Guard and finding new ways to serve in a civilian career.

Moore joined Duke Energy in 2017 to improve work readiness for lineworkers. Moore’s team is finding ways to improve processes and remove impediments so lineworkers can focus on long-term fixes that will improve power quality and reduce outages.

Working at Duke Energy is similar to the military, she said. There’s a sense of purpose in knowing that her work affects millions of people. When restoring power after a storm, with thousands in the dark, that purpose is even more clear. 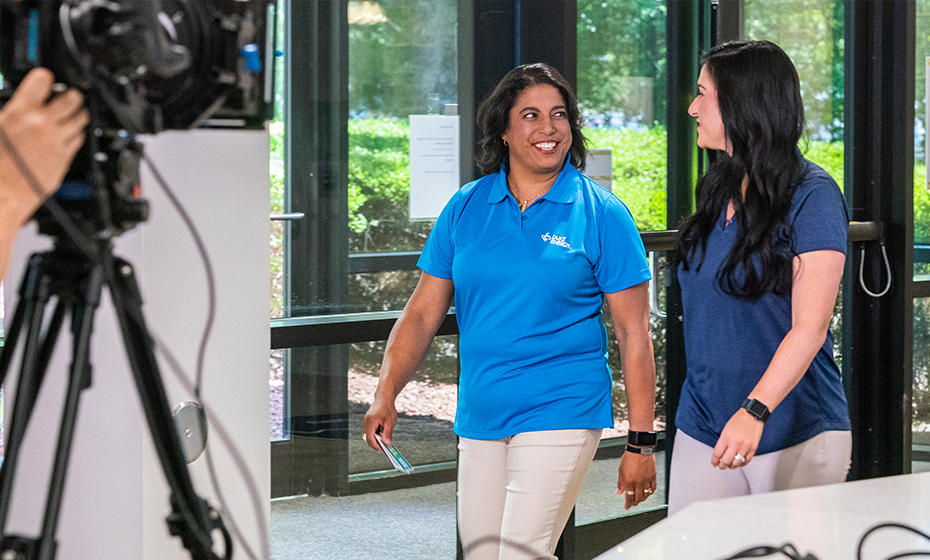 “If you leave here and somebody still doesn’t have power, you can’t lay your head on a pillow at night. It just doesn’t feel right,” Moore said. “It’s one thing to work with somebody Monday through Friday. It’s another thing to know when crisis hits, they’ve got your back and you can count on them.”

As a reservist, she said, that is one of the biggest benefits of working at Duke Energy. A few weeks after she joined the company, the National Guard sent her to Puerto Rico to help with response to Hurricane Maria. She had to tell her new boss she was leaving and didn’t know when she would be back.

Normally, she said, that would be a tense conversation, but she received unwavering support. 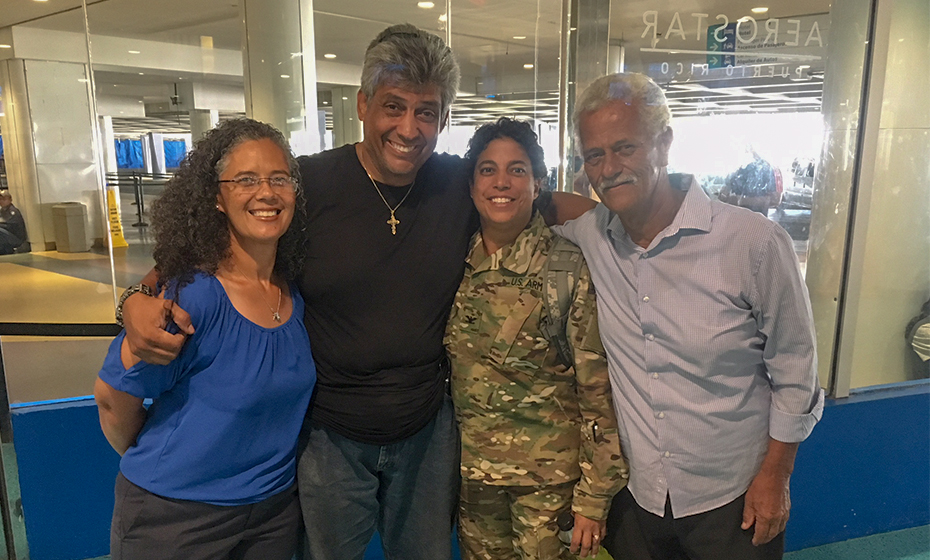 Moore arriving in San Juan, Puerto Rico, for National Guard responsibilities after Hurricane Maria. Her uncle and cousins, pictured here, were affected by the hurricane and met her at the airport.

“That’s an amazing thing that Duke Energy offers, and I would say it’s unique because they truly respect the skills and capabilities you have and the call to serve that you have with the military,” she said, “because we have that call to serve at Duke Energy, too.”

When she started her career, her aspiration was to be a Brigade S3, one rank below her current rank, but she reached that goal early in her career. She continued following the work that went back to the sense of purpose she found in the stories her relatives told her as a child.

Moore said if she wakes up in the morning and likes what she’s doing, she’ll keep doing it and see where it takes her. When people thank her for her service, she’s grateful, but it also reminds her of her lifelong call to serve. She knows she couldn’t do anything else.

Why Duke Energy received the Department of Defense's Freedom Award

On Aug. 24, Duke Energy was honored at the Pentagon as a recipient of the Department of Defense’s Freedom Award. Duke Energy is one of 15 companies to receive the award in 2018 for its support of reservists including: