Workers had to replace, upgrade or move infrastructure along 9.3-mile Blue Line Extension

It takes Xuan Truong an hour and 15 minutes to commute from her uptown Charlotte apartment to her classes at the University of North Carolina Charlotte. The city’s new light rail trains will get her there in 22 minutes.

For Truong, a graduate student who is confined to a wheelchair, it means more than having extra time. She’ll be able to wheel herself on and off the train – and not have to rely on a bus driver to stop the bus, lower a ramp, and help her get off.

From its early stages of engineering through the construction work being tweaked in the last days of the project, teams of Duke Energy employees have worked continuously to help bring light rail service to the region. 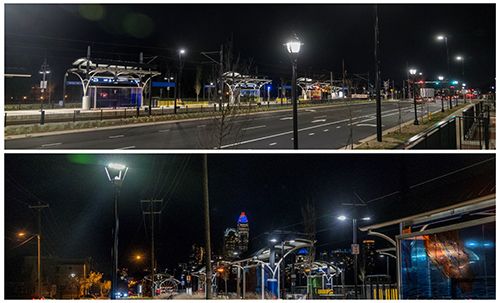 The Blue Line started running southbound trains from uptown to Pineville in 2007. The $1.1 billion extension work began in 2009 and ran into complications caused largely by tightly compressed infrastructure that needed to be upgraded, replaced or moved.

“It was a massive undertaking for everyone involved,” said Casey Yelton, the project engineer for Duke Energy. “It took a lot of folks working together over a long period of time to pull it off.”

Duke Energy workers relocated about 400 poles, rerouted wires, and redesigned a few dozen circuits to accommodate track construction while continuing to serve customers along the route. They also installed about 88,000 feet of new primary conductor, traffic lights and the overhead wires that power the trains.

The Park and Ride station at JW Clay Boulevard and U.S. 29.

“Duke Energy has been an integral partner for more than a decade,” said CATS Blue Line Extension Director Jill Brim. “Since the inception of the LYNX Blue Line … Duke Energy has supplied the dependable power CATS uses to operate our light rail system.”

Yelton said it was challenging to work around existing rights of way in the midst of a busy urban environment. Another feat was coordinating utility crews (electric, natural gas, water and multiple telecom providers) to install their equipment.

“There was so much construction going on and you had to be conscious of everyone, and work with each other – sometimes around each other – with safety always in mind,” Yelton said. “We didn’t incur any accidents or injuries.” 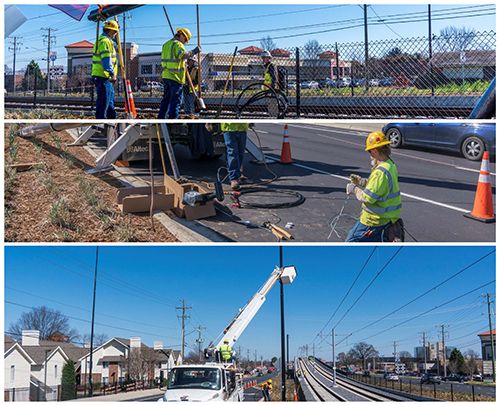 There are 11 stops along the route, which starts in uptown, runs through Charlotte’s NODA neighborhood, and ends at the university. Three stops have parking garages and one has a park-and-ride lot. Train riders will see new apartments, businesses and offices built in anticipation of the light rail; with many more planned or under construction.

CATS estimates the trains will carry about 25,000 riders a day. UNCC will have one stop on campus and one at the JW Clay Station. A $25 fee each semester gives students unlimited riding access.

“I literally watched it being built from the ground up during my college career,” Miller said. “It’s so exciting to be part of that inaugural class, and to finally see it come to fruition.”

For Truong, it’s a life-changer. “Every time I take the bus I feel like it’s a special event,” said Truong, 26. “With the train, I won’t have to cross any roads, it’s a lot faster, and I’ll get to feel a little more normal. It’s not just me or others with disabilities – this opens the doors and brings so many more options to all those who don’t drive or have cars.”