Outside the Optimist Hall mixed-use development in Charlotte, N.C., construction is underway for shops and restaurants, but inside, Duke Energy employees are already working. Software engineers, designers and data scientists are creating products customers are asking for. 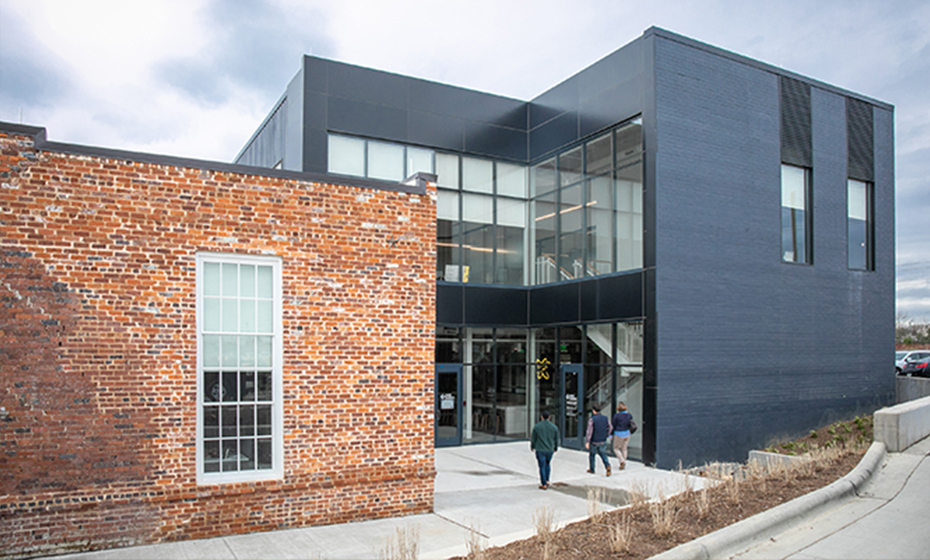 Duke Energy is the first tenant at Optimist Hall, an 83,000-square-foot mixed-use development outside uptown Charlotte.

Their latest releases include an outage map that will make power outages easier for customers to manage and the company’s first mobile app, which allows customers to pay their bills, track energy use and more. Roughly 400 employees moved from various locations to the leased building in late January.

The building is a former textile mill. Its history is reflected in the gingham-style carpet and original wood floors, but it’s not just beautiful. It was designed with purpose, and Duke Energy SVP of Business Transformation and Technology Brian Savoy said it’s what he dreamed of: a place to accelerate innovation at Duke Energy.

The two-story building is divided in three areas for different stages of product development, but they are all open and collaborative so impromptu meetings can spark ideas. Instead of working on projects in their own departments (sometimes in different buildings), product owners work near teammates from other departments like power generation, HR and IT. About 300 of the employees at the Innovation Center at Optimist Hall are permanent and 100 will rotate based on projects. 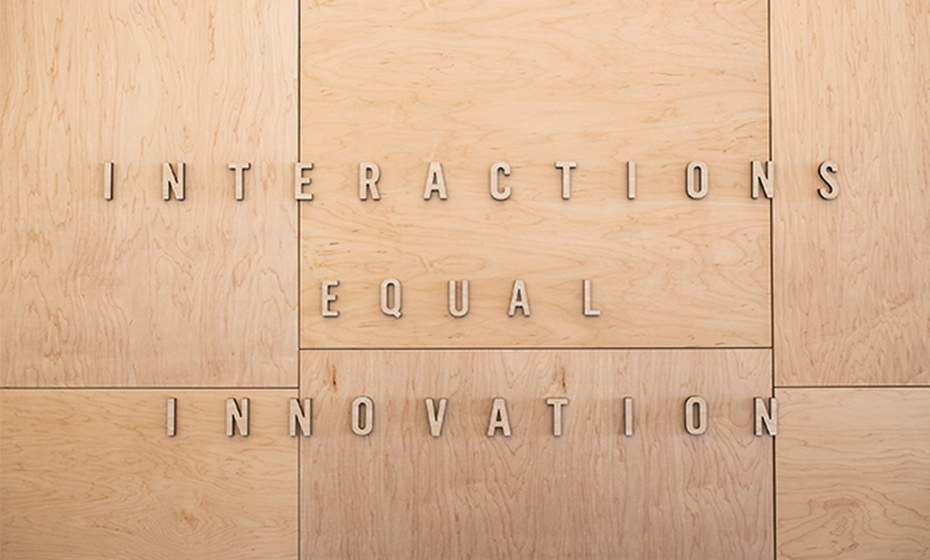 The space is designed to encourage collaboration between teams to spark ideas.

Teams manage projects differently, too. They work in two-week sprints and measure progress while prioritizing the features that matter most to the user. Versions of the product are released in waves and tested to be sure it’s right for the user before a final version is released.

“We’re listening before, during and after we build solutions,” Savoy said, “and this whole process happens in weeks instead of months.”

It’s an unusual way of working for a utility, Savoy said, but based on their experiences with other companies, customers increasingly expect seamless transactions delivered quickly. Energy companies manage complex assets and situations where employees and customers could be in danger if safety and reliability aren’t top of mind. Duke Energy will never compromise those priorities, he said, and layering in new technologies with this customer focus will get the results they want.

“We’re adapting our methods,” he said, “to match what they expect.”

The final phase of Duke Energy’s Innovation Center at Optimist Hall, The Exchange, is to open in late summer, and customers will be invited to see what teams are working on and participate in focus groups and product testing.

Until then, here’s a look at how the layout works: 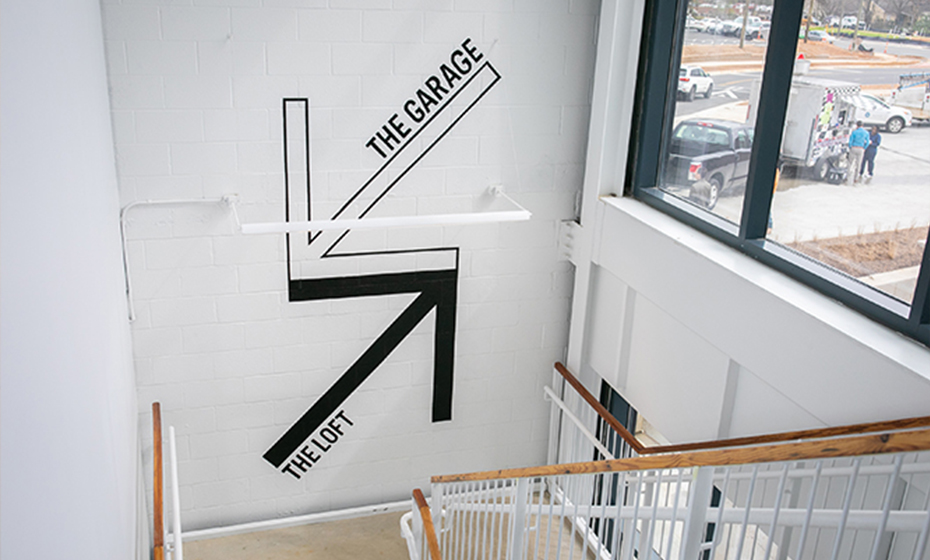 The first of the three phases is The Loft, where ideas begin. It’s a place for thought and discovery so teams can define their vision. Employees come in with a problem they’d like to solve and begin to think about the end-user, their challenges and desires. To upgrade the outage maps, for instance, developers considered feedback from nearly 2,500 customers. 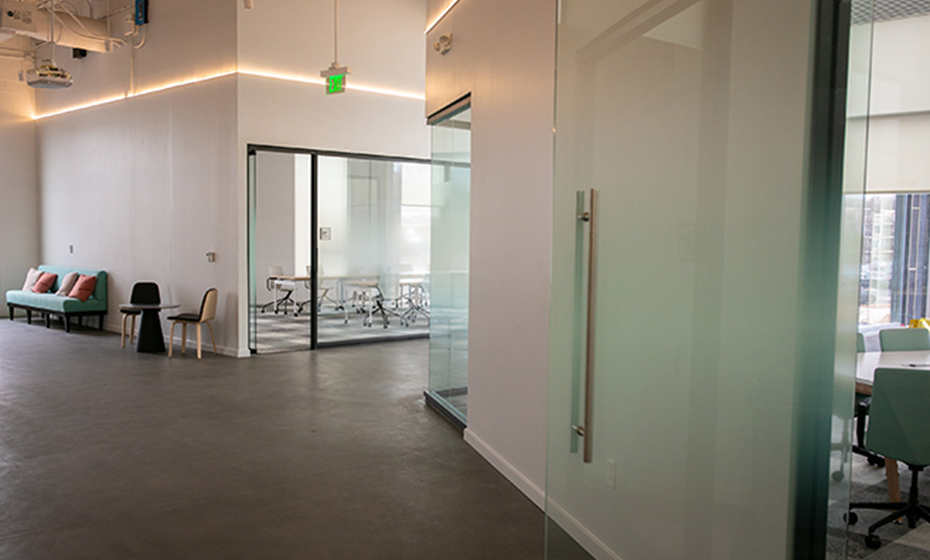 There’s plenty of open areas and drop-in rooms for teams to collaborate. The space is flexible – couches and chairs are expected to be moved around. Even the furniture in conference rooms is on wheels so it can be re-configured for discussions, demos or focus groups. 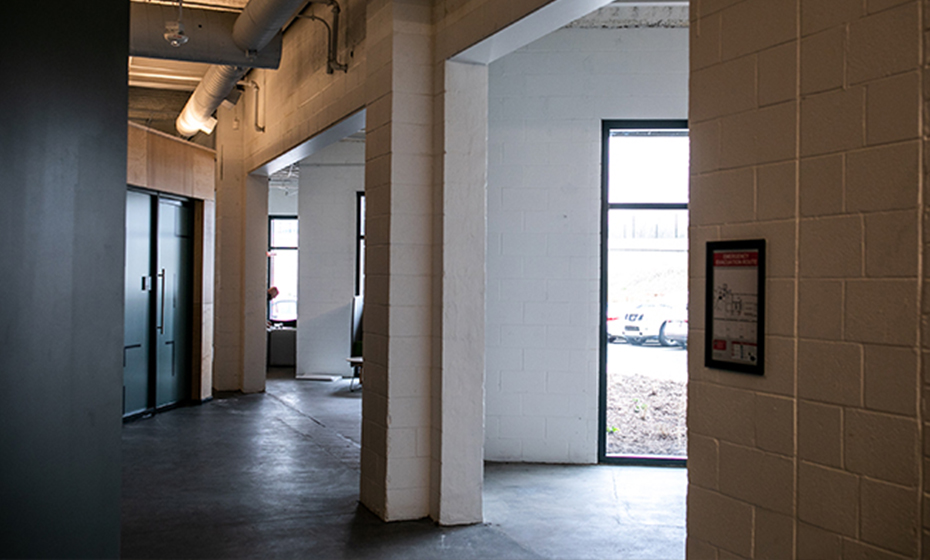 Once ideas are solidified and problems are defined, they move from The Loft to The Garage for testing. The Garage aptly features the original bays, seen here, where trucks used to pick up and drop off textile shipments. 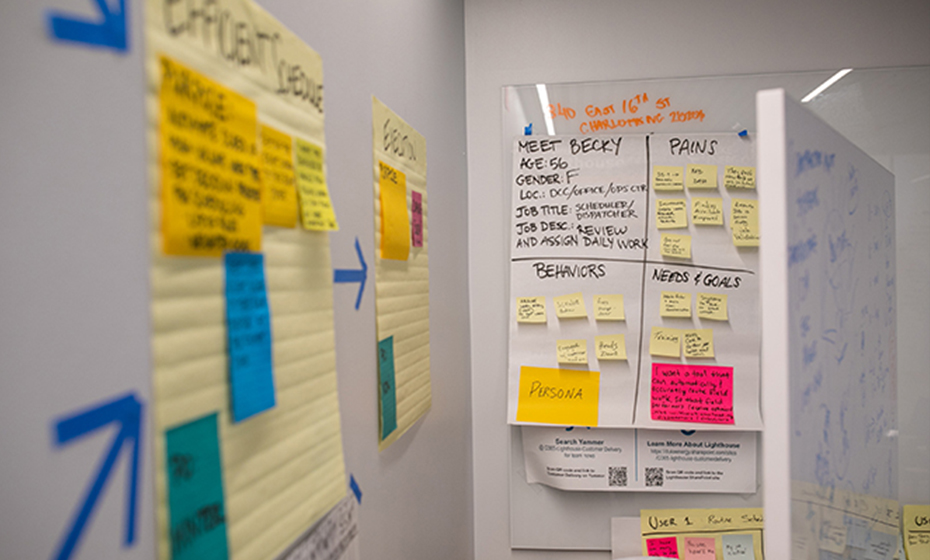 Prototypes are created here, and the walls are covered in sticky notes and dry-erase markings that were developed in The Loft phase. In The Garage, the stickies continue to evolve as discoveries are made and teams adjust their plans. 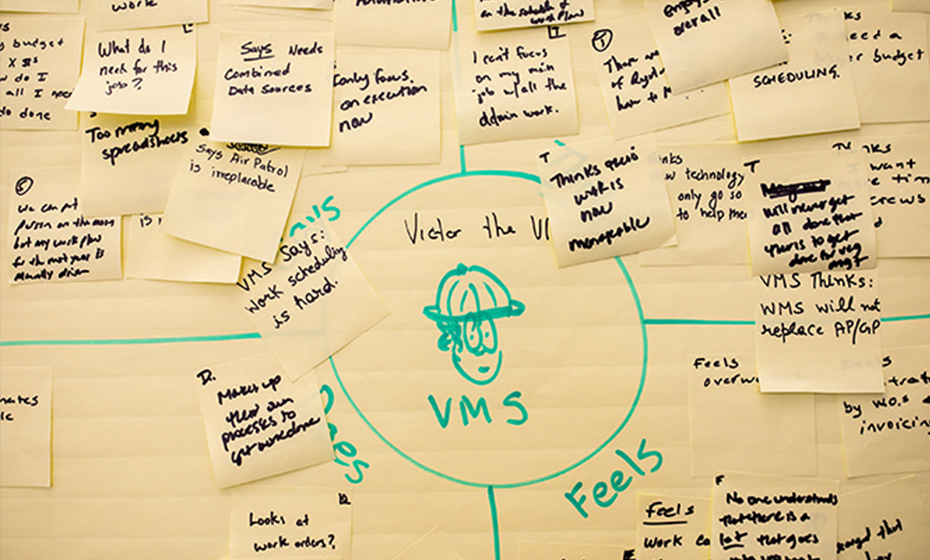 There’s a clear focus on the user. Each project has an empathy map where developers are reminded of what they know about how the user thinks, feels, says and acts, so they can be sure they’re staying on track.

“A customer solution is one that you’re putting out to the world, so it needs to be right,” Savoy said. “It needs to have a you-thought-about-me feel or customers won’t use it.” 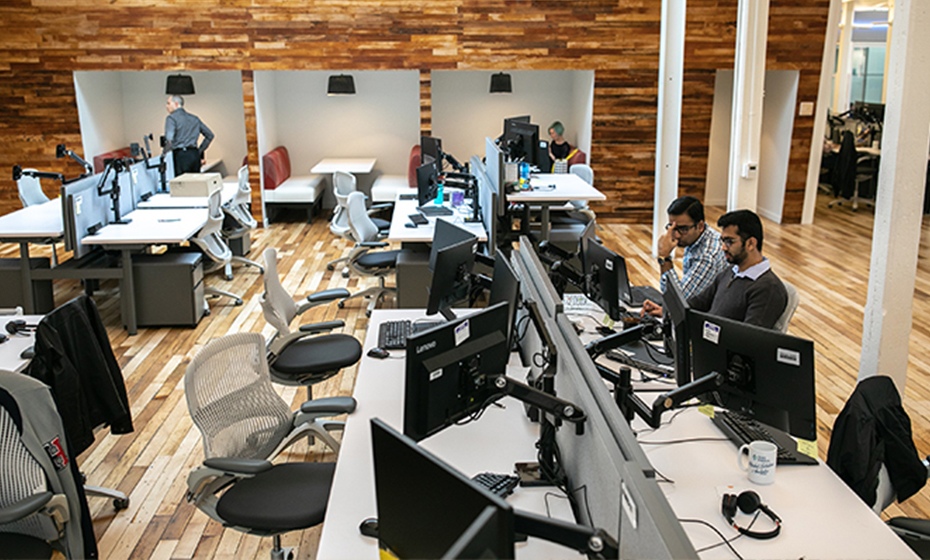 Once a plan is developed in The Garage, the project moves to The Factory, the final phase, where teams start production. 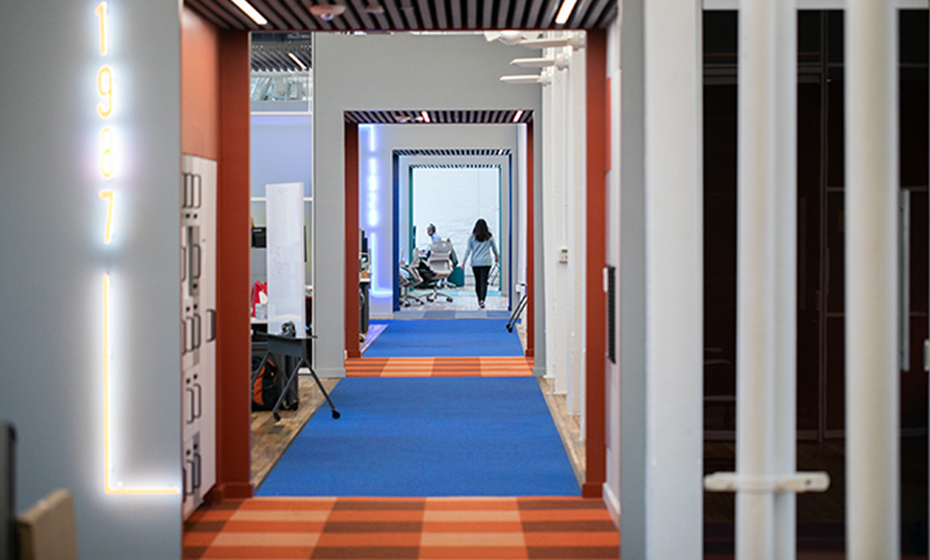 The Factory floor is organized into neighborhoods that are grouped based on their project type. Looking down this hall, each orange gingham section in the carpet marks the beginning of a new neighborhood. 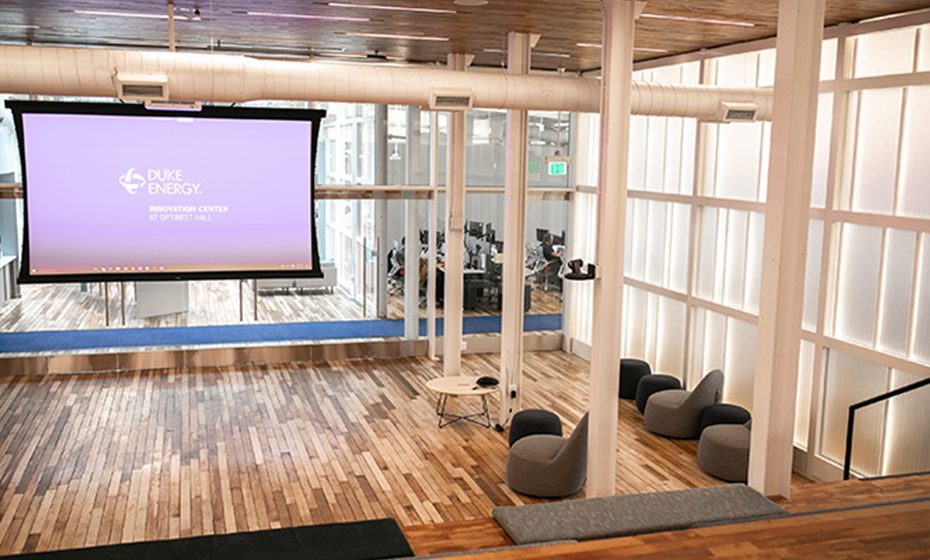 The Factory includes the Town Hall – a meeting space where teams can share their progress and product demonstrations. Savoy said it’s exciting to watch teams collaborate here. They aren’t afraid, he said, to imagine what’s possible by starting and ending the design process with customers in mind.

“We want to earn their loyalty every day,” Savoy said. “That’s what our technology and our innovation is all about.”