What does a Duke Energy lineworker do when he’s climbed his last pole?

If you’re Don Hamrick, you train the next generation to restore power no matter what Mother Nature has to say about it. 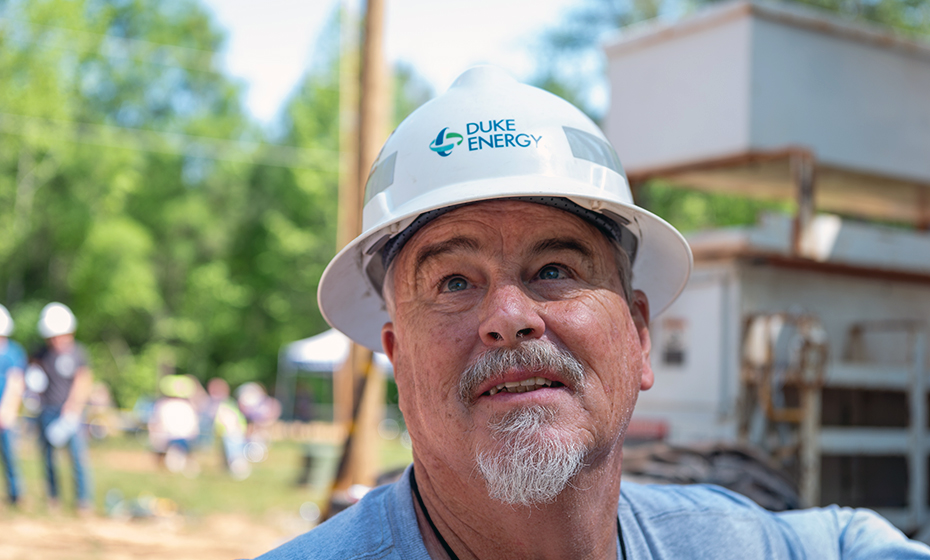 Don Hamrick retired from Duke Energy in 2019 after 39 years on the job.

Each August when he calls his class to order, he asks them, “Why do you want to be a lineworker?” Before his 17- and 18-year-old students can answer, Hamrick gives them fair warning.

“I tell ’em, ‘This is what you’re up against. Missing holidays with family. You’re out there when the weather’s the best in the world and when it’s the worst. Ice, cold, heat. It’s got to be something you really want to do. Your heart’s got to be in it.’”

Sounds good to Patrick Bessman of Clover, S.C. He graduated from Hamrick’s class on May 4. Bessman loves climbing poles and can’t picture himself sitting behind a desk all day. Inspired by Hamrick’s enthusiasm, he can’t wait to help people.

After 39 years and seven months with Duke Energy, Hamrick found a new calling, sharing his knowledge and enthusiasm with teenagers like Bessman. In Upstate South Carolina, York Technical College, York School District One and Clover School District have come together to offer a utility lineworker program to seniors from York Comprehensive and Clover high schools.

Hamrick teaches the class in York. The same class – 8 a.m. to noon weekdays from August to May – is offered at the York Tech campus in Chester, S.C. That one is primarily for adults. Since the program began in 2019, 150 students have earned their Utility Line Worker Certificate and are eligible to go to work. 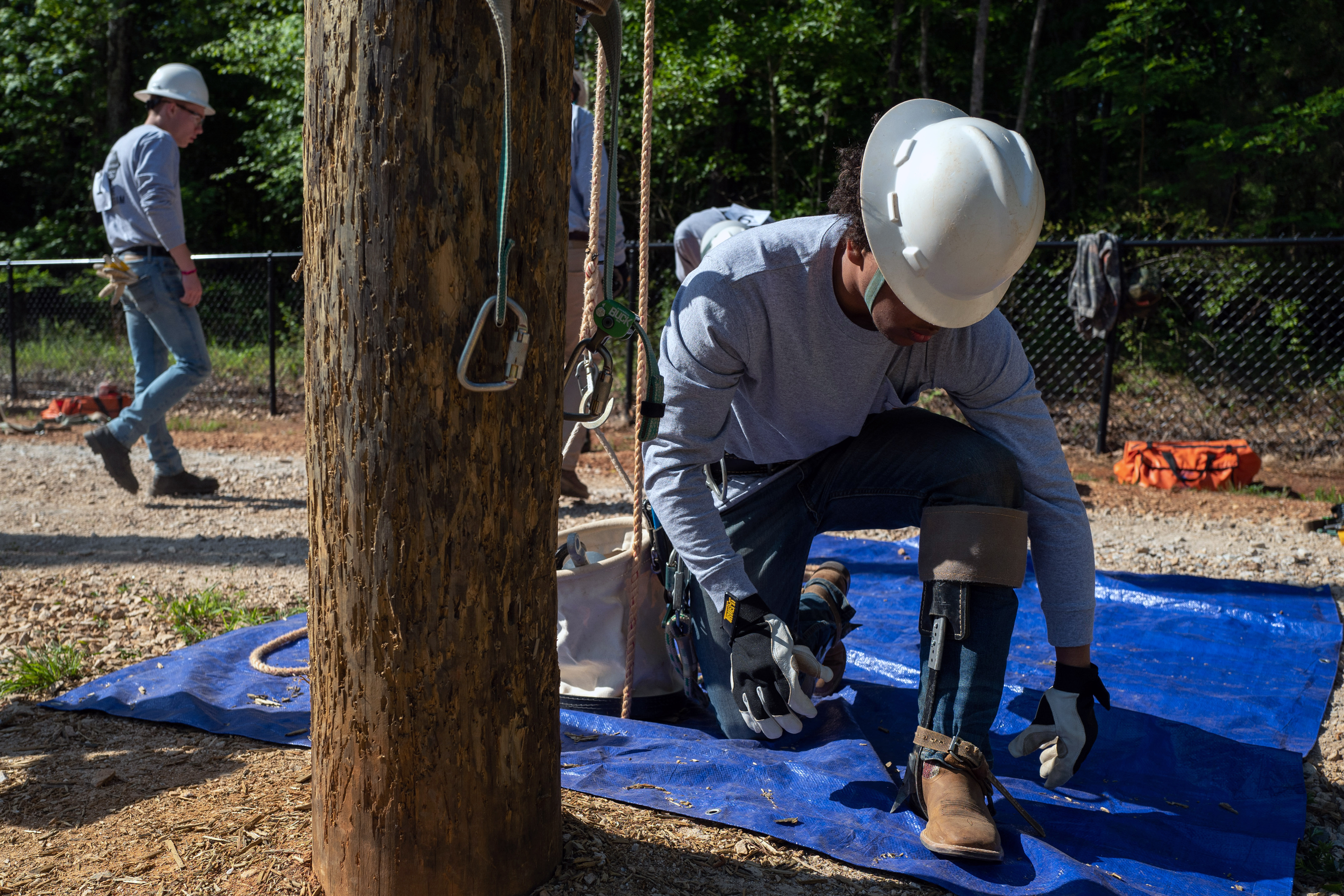 A student lineworker gets ready to climb a utility pole at the York Comprehensive High School rodeo.

At a rodeo to show off their skills, this year’s class of 11 high school graduates brought their resumes. In addition to family and friends, the crowd included recruiters from several utility companies.

The first is supporting efforts to attract, inspire and train the next generation of employees, particularly in the front-line areas. Among the 115,000 lineworkers in the country, more than 7,800 are part of the Duke Energy team. They are responsible for building, operating and maintaining equipment and more than 300,000 miles of power lines in Duke Energy’s service territories.

Duke Energy has been a huge supporter of the program. Sonia Young, assistant vice president for the Workforce and Economic Development Program at York Technical College, said Duke Energy awarded the S.C. Technical College System $1 million to create and expand lineworker training sites that are in company territory in South Carolina. The portion that York Tech received helped expand the program in Chester and launch the program with the high schools. Duke Energy also awarded a $10,000 grant to the high school program and is among several utility partners and suppliers that have donated equipment.

The second priority reflected in the program is connecting with the company’s 64,000 alumni. The goal is to encourage them to continue making an impact on their communities, even after they leave Duke Energy. In 2021, more than 1,100 retirees supported 1,600 charitable causes by logging 27,000 volunteer hours with the Duke Energy Foundation. 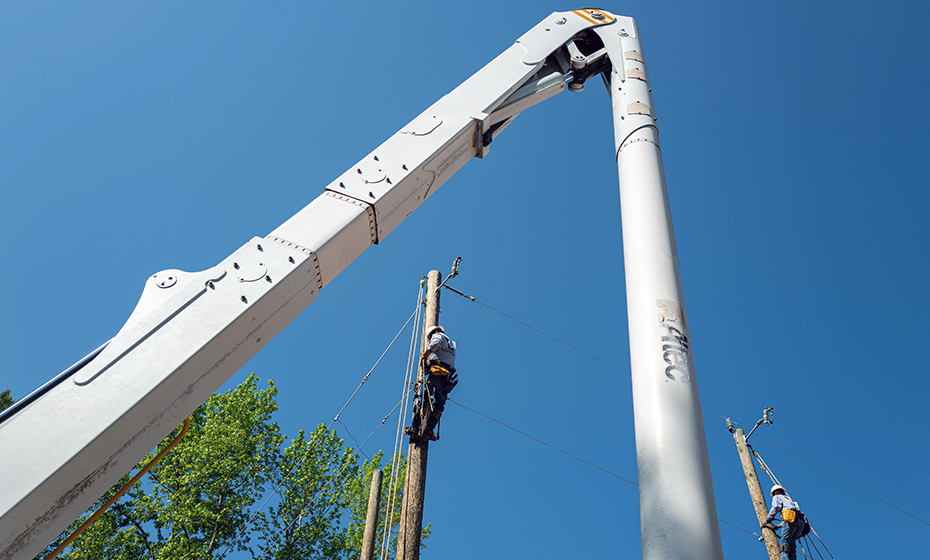 High on the list of those giving back is Hamrick, 62, of Blacksburg, S.C. This isn’t a volunteer gig. He is employed by York Technical College, but it is a labor of love. Three months after retiring from Duke Energy in June 2019, he helped launch the lineworker program – assembling equipment and then teaching classes.

“Don has such a heart for this program and the students,” Young said. “His energy and enthusiasm are contagious. He understands the opportunity that this program affords our students.”

As a lineworker, Hamrick said he loved restoring power regardless of the obstacles he faced, in 1989 in Charlotte after Hurricane Hugo; in 2005 in Amite City, La., after Hurricane Katrina; and in Indiana after a tornado.

This is the reality, the ups and downs, that he is imparting to students. Seventy percent of the work you’ll do, he tells them, is fixing what’s broken. You must learn how to operate a mini-excavator, race up a 45-foot pole caked in ice, make the repair and get down safely. You must not be afraid to climb a pole. 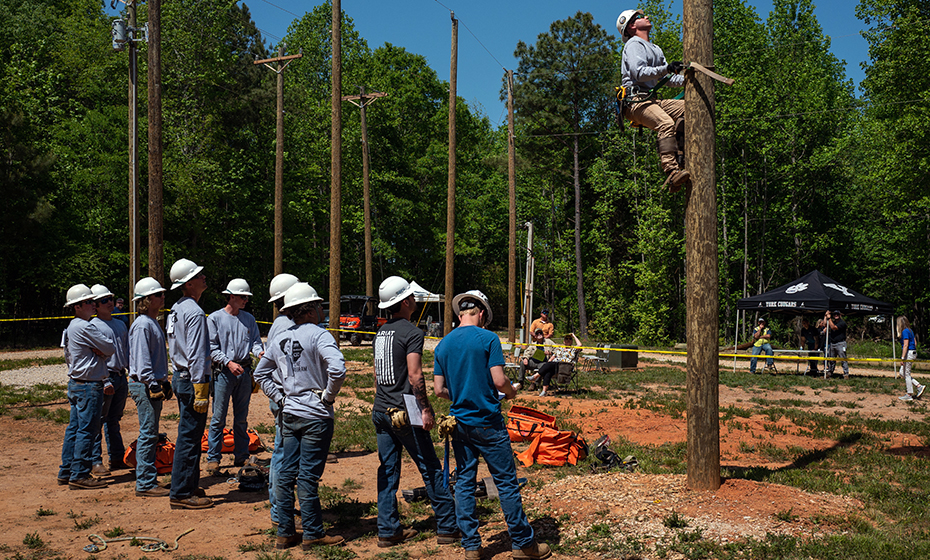 At the rodeo, students participated in some of the same events as professional lineworkrs, including speed climb, insulator change out, hurt man challenge.

One student was intimidated by heights on the first day of class. Hamrick said he helped him get over it within a month. You must be agile, possess stamina, work well with others, trust your partner and equipment and be willing to go the extra mile.

Above all that, Hamrick tells them, this is the key to success: “You have to have the want-to.”

A whole lot of want-to was on display at the second annual rodeo in the training field beside York Comprehensive High School, 35 miles southwest of Charlotte.

Students came dressed in hard hats and matching blue “Utility Line Worker Program” T-shirts. Family and friends recorded the rodeo on their cellphone cameras. Recruiters were busy taking notes on these prospects, a tough job since all 11 appeared to impress.

This was a competition. Commemorative mugs went to the first to complete events like Speed Climb and Insulator Change Out. The Hurt Man Challenge was just like it sounded: Race up the pole, tie a rope around an unconscious 175-pound dummy and get him down to the ground for CPR as fast as you can. 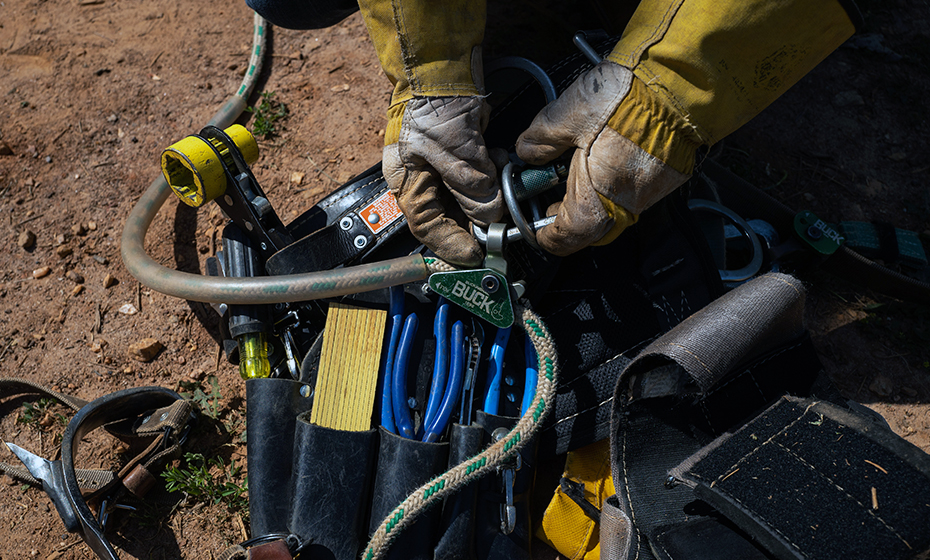 Tools of the trade.

Chase Edington was exaggerating when he likened the rodeo to “going to war.” But there’s no exaggerating his fierceness, and his excitement for what lies ahead. In addition to finishing his senior year at York Comprehensive High, he works on a dairy farm. There he has learned to brave the elements. In the lineworker class, he has learned to embrace the brotherhood that the job requires, and the toughness.

He turns 18 on the Fourth of July. His future is coming into focus.

“You come home from being a lineman,” he said during the rodeo, “you work for what you have. That’s a good thing.”

How to become a lineworker: For more information and to apply, go to the Duke Energy jobs page. 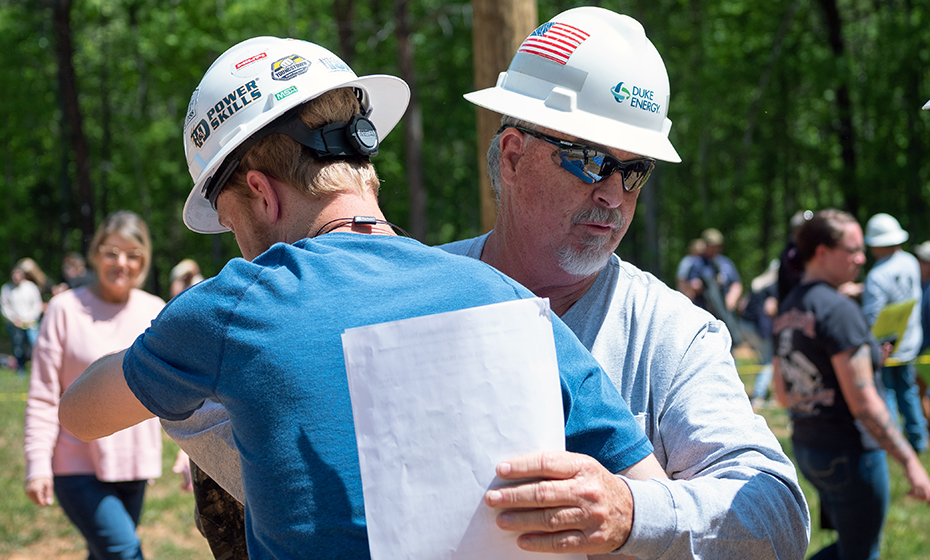