Right behind classes and sports (and maybe parties), energy is a hot topic on the nation’s college campuses. Colleges are focusing on sustainability and lowering their carbon footprint. Here are three collaborations between Duke Energy and colleges for a greener energy future. 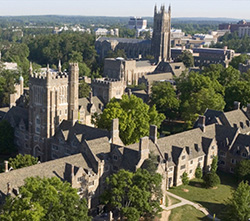 In 2016, Duke University and Duke Energy announced a combined heat and power facility that will use natural gas to generate electricity and produce steam for the university’s needs. The arrangement will lower Duke University’s carbon footprint by about 25 percent by using a more efficient energy mix.

“This partnership will … accelerate our progress toward climate neutrality,” said university Executive Vice President Tallman Trask III. “By combining steam and electricity generation systems, we can increase efficiency and reduce our overall consumption by millions of units of energy each year – plus have a positive effect on the community at large.” 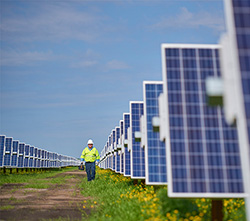 The project significantly reduces the carbon footprint of the universities – eliminating about 60,000 metric tons of carbon dioxide compared to conventional electricity. This is equivalent to taking roughly 12,500 cars off the road.

“This represents a giant leap forward toward our goal of carbon neutrality by 2040,” said Dr. Kathleen A. Merrigan, executive director of sustainability at George Washington University. 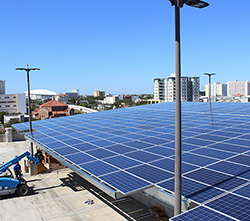 The University of South Florida St. Petersburg (USFSP) is using a grant from Duke Energy to explore how to store and use energy from the sun. A large battery works with a 100-kilowatt solar photovoltaic system on top of a university parking lot.

Duke Energy, which has reduced its carbon emissions 28 percent since 2005, operates about 20 wind power plants, 50 solar power plants and 10 large battery projects across the country.