Jonathan Pellitteri's “Downstream” sculpture depicts the rivers in the Carolinas and hangs on the 21st floor of Duke Energy’s headquarters in Raleigh.

Soil samples arranged on artist's studio floor are from the Keowee, Catawba, and Yadkin rivers.

When Jonathan Pellitteri was commissioned to create artwork for Duke Energy’s Water Resources Fund, he turned to the rivers of the Carolinas for inspiration.

Pellitteri drove from his home in Davidson, N.C., to the banks of the Cape Fear, Catawba-Wateree, Dan, Keowee-Toxaway, Neuse and Yadkin-Pee Dee rivers. At each shore, he scooped water into a plastic jug and shoveled dirt into a large bucket. Back at his studio in Charlotte’s NoDa neighborhood, he incorporated the samples into his art.

“Downstream” now hangs on the 21st floor of Duke Energy’s headquarters in Raleigh, a stunning interpretation of six river systems that the company manages under a Federal Energy Regulatory Commission (FERC) license and that are the focus of the Water Resources Fund.

“The artwork is so representative of the work we’re trying to do across the state, bringing different groups together, working toward solutions,” said Amy Strecker, principal community affairs manager for Duke Energy Foundation. “All these different river systems are connected, and we have a responsibility to be good stewards and preserve them for future generations.”

Pellitteri carved the flow of each river bed into the top of 150 connecting blocks and lined the beds with soil dug from the rivers, varying from a dull gray silt to vibrant red clay. Acrylic tubing containing some of the water he collected crisscrosses the piece.

Each time a nonprofit receives a grant from the fund, it also receives a matching one-block segment of river. Like the blocks Pellitteri used in “Downstream,” the individual blocks are fashioned from fiber wall board made from compressed recycled paper. Each side is inset with a vial of water from different rivers. On top is the topography of that section of river with the riverbed again lined with soil.

While creating the sculpture, Pellitteri said he grew to appreciate the roles different rivers play in the Carolinas: “The message I wanted to convey is that no matter where you are along the waterway, whatever you’re doing it is going to affect communities downstream. And whatever’s going on upstream is going to affect you. So, it’s important to keep these waterways a reality and working.” 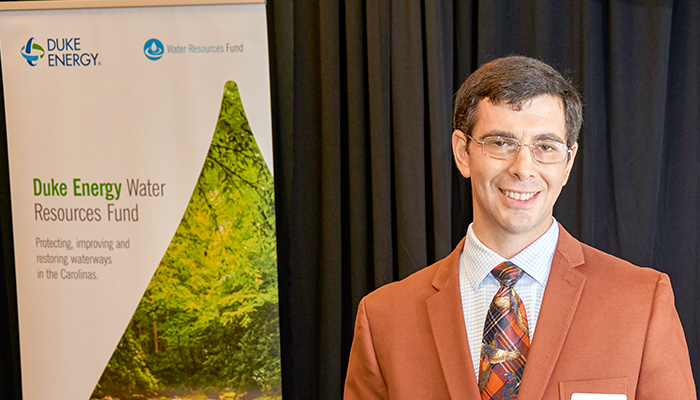 That’s also the message of the Water Resources Fund, created in 2014 after a storm water pipe broke, releasing coal ash from the company’s Dan River Steam Station into that river. The $10 million fund provides grants for nonprofits and local governments to improve water quality, promote fish and wildlife habitat and increase public access – with $1.5 million earmarked for the Dan River basin and $500,000 for a park in Danville, Va., where clean-up efforts were staged.

As of December, the fund had awarded $5 million for 59 projects.

Strecker said Duke Energy was looking for a unique way to acknowledge the work of the grant recipients. “We wanted something they could take back that would be representative of the fund’s intention,” she said. “One of the things we really liked about Jonathan’s work was it wasn’t just representative of waterways, it actually incorporated materials from the waterways.”

Pellitteri became interested in the role of waterways when he moved from Massachusetts to Louisiana, where he earned a masters in fine arts from Louisiana State University in Baton Rouge. “There, everything is dependent on the Mississippi and the bayous,” he said. “That made a big impression on me.”

He began incorporating water into his sculptures. Despite leaving the coast in 2013 when his wife took a job in Mooresville, N.C., Pellitteri still felt drawn to the water. He created a piece about the Catawba River for the Arts & Science Council of Charlotte and Mecklenburg County, and that’s how Duke Energy learned about his work.

As Duke continues to award grants from its Water Resources Fund, more nonprofits and local governments throughout North and South Carolina will receive individual blocks that Pellitteri designed.

“We try and match each organization with a piece of their waterway,” Pellitteri said. One of his sculptured blocks containing a bit of the Dan River went to Halifax, Va., which is using its grant to improve river access. A block with soil and water from the Cape Fear went to Elizabethtown, which will construct a boardwalk. A bit of the Wateree went to the Lake Wateree Association, which will track algae growth.

“I loved the idea that while we are many, we are also one,” Strecker said. “We have this huge display of this awesome piece of art in Raleigh, but pieces of it are now scattered across the state.”