Blue herons’ home on the lake protected from erosion

From a distance, Heron Island looks like any of the 100 islands on Lake Norman, north of Charlotte, N.C. As its nickname suggests, however, this strip of land is home to between 60 and 80 great blue heron nests, the largest collection of herons anywhere on the 32,000-acre lake.

These heron nests were in danger – the island has been eroding due to waves generated by increasing boat traffic and heavy storms. 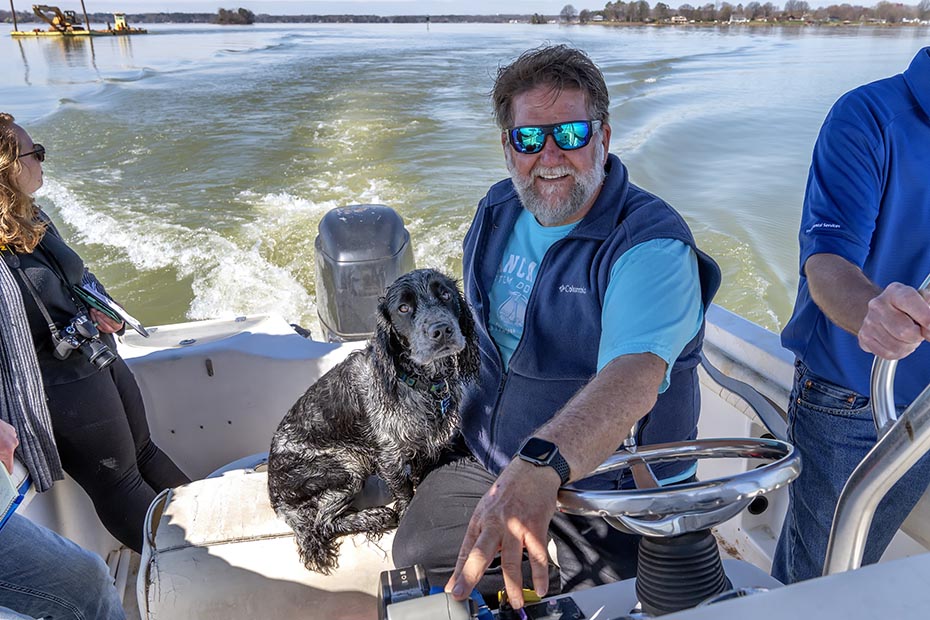 Volunteer Mark Lancaster and his dog, Marlin, on Lake Norman.

So when the local chapter of the North Carolina Wildlife Federation (NCWF) requested grant funding from Duke Energy’s Habitat Enhancement Program (HEP) to shore up the island, Duke Energy scientists worked with NCWF’s staff and volunteers to protect the island without intruding on nesting season, which runs from April 1 through Aug. 31.

“Without Duke Energy’s support, this special habitat would have vanished in a matter of years,” Wildlife Federation CEO Tim Gestwicki said on a recent boat tour. “Given all the surrounding shoreline development, saving this unique island was critical. We’ve been racing a clock to complete as much work as possible before stepping away for nesting season, and our volunteers really came through.”

Volunteers helped Duke Energy place 900 gallons of native plants and 600 tons of rock, delivered by about a dozen barge trips since February, along with a backhoe and platform needed to place the rock. 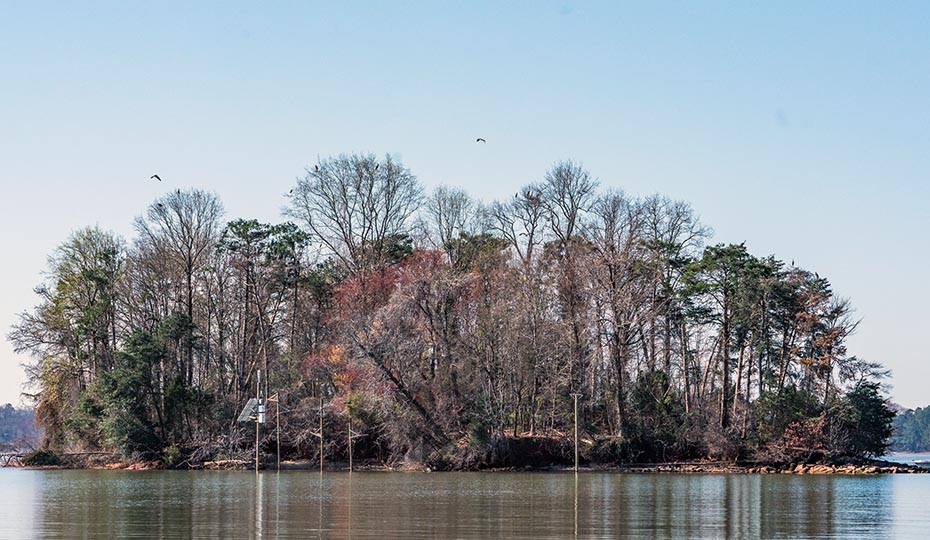 “Every summer, our conservation group ends up with a waiting list of more than 100 people to get on the heron and osprey boat tours,” said Vaughan, who was a senior scientist working out of McGuire Nuclear Station, focused on herons, osprey and loons. “People are amazed by these birds.”

While Vaughan and his colleagues dug holes in March for the buttonbush and silky dogwood, male herons gathered large sticks from an adjoining island, flying back in a chorus of prehistoric shrieks to females building the nests. A typical nest will have three to five eggs that hatch after about 28 days; both adults then care for the hatchlings in the rookery until they are ready to fledge. 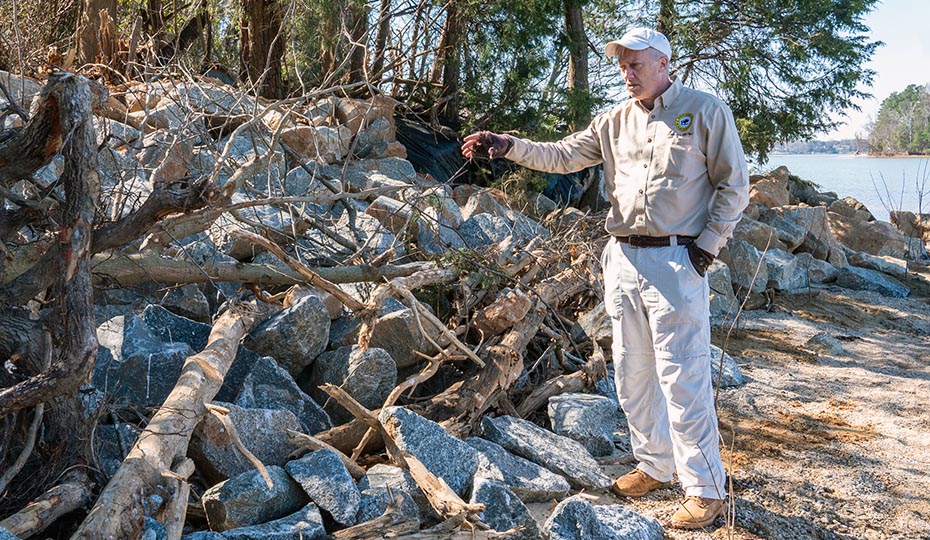 April boat tours have been canceled because of COVID-19, but summer tours are still planned. In the meantime, those interested in observing nesting season can watch NCWF’s two solar-powered nest cams funded by Duke Energy.

“When Duke Energy helped the Wildlife Federation launch its live osprey cam back in 2018, it went viral in local classrooms,” said Mike Abney, a senior environmental resource manager with Duke Energy. “The teachers loved it as much as the students, and we’re expecting the same with this heron cam. If you can’t get out on a boat to see nature in person, we’ll bring nature to you.” 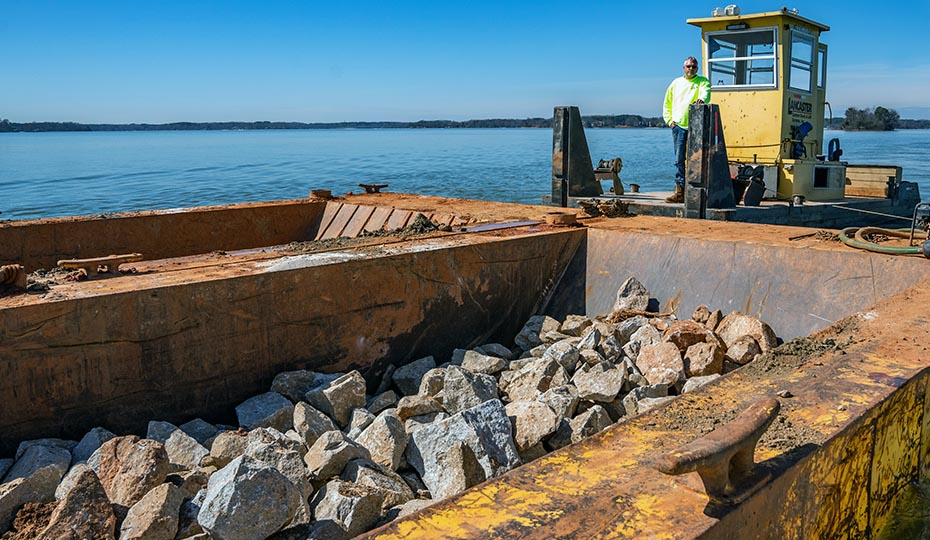 A barge with a shipment of rocks to contain erosion.

Great blue herons are listed by the NC Natural Heritage Program as a vulnerable species in the Piedmont due to habitat loss, so Duke Energy’s Shoreline Management Plan protects these rookeries. The company’s environmental scientists document heron nests while conducting an annual bald eagle survey, all part of its federal license for 13 hydroelectric stations in the Catawba-Wateree River basin.

Since its inception in 2007 as part of relicensing, Duke Energy’s HEP has contributed nearly $2 million to about 70 projects in the Carolinas such as this one. That includes money from Duke Energy as well as dock fees from property owners.

“Heron Island is a perfect example of how lake property owners can see their funding in action,” said Abney. “A project like an underwater reef provides a wonderful habitat for fish but it generally goes unnoticed. This is different – there’s something about a bird with a 6-foot wingspan and a prehistoric cry that generates passion from just about everyone who recreates on the lake.”

How you can help along the lakes

The Habitat Enhancement Program is a cooperative effort by Duke Energy, the North Carolina Wildlife Resources Commission and the South Carolina Department of Natural Resources. HEP grant review panels include biologists, residents and organizations such as the U.S. Fish & Wildlife Service.

“We’re looking to fund more projects like this,” Abney said. “If you’ve got an idea for habitat preservation or enhancement along the Catawba-Wateree anywhere from Lake James down to Lake Wateree, bring your concept to a great nonprofit partner like the Wildlife Federation, work with them on a grant application, and we’ll help put it in motion.”