In early 2002, Steve Scott saw a trend emerging in rural South Dakota that upset him.

Corporate farms were taking off as family-owned farms with natural prairie lands were disappearing. Beyond the weathered barns, broken fences and abandoned houses, Scott saw an opportunity to protect the prairie and improve wildlife habitat, while helping to make a difference for future generations.

Scott and his wife, Kari, who happens to be his kindergarten classmate and high school sweetheart, have acquired more than 500 acres near Howard, S.D., in five transactions since 2002. Some parcels have been restored to a natural setting, while other properties are in various stages of renewal. These once-abandoned farms now boast of vibrant habitats, teeming with wildlife.

“With the rise of commercial farming and movement of people to metro areas, many former farm sites are in disrepair,” said Scott. “In addition to dilapidated structures, grasses and heavy weeds such as thistle, wormwood and sagebrush overtake acres of land.”

Jared Wiklund, public relations specialist for Pheasants Forever and Quail Forever, said the U.S. has lost more than 15 million acres of grasslands and prairie since 2007. “Although this statistic might seem overwhelming, the individual efforts of private landowners are helping to restore wildlife habitat and wildlife populations in the Great Plains,” said Wiklund.

Scott buys the land mostly from his own pocket. Occasionally, family members and friends have joined as investment partners. The U.S. Department of Agriculture also funded certain environmental improvements.

“You are paid to achieve the goals of a particular project,” Scott said. “One program may incentivize landowners for restoring sensitive soils; another may require improving waterways.”

I just hope that when my number is called, I’ll still be restoring the terrain that future generations will enjoy.

Land restoration is the opposite of a do-it-yourself weekend job. It takes years of hard work and diligence. So why do it?

“I grew up working on farms around the town of Howard,” said Scott. “I also love the hunting and fishing that’s part of the rural experience. Taking land and reviving it results in great satisfaction.”

Once a parcel is purchased, getting started is simple. Just plan on weekend after weekend of work for the next few years, Scott said, chuckling.

Scott begins by bringing in heavy equipment, bulldozing old structures, such as granaries, and recycling or burning other materials, such as wood from the farm home, chicken coops and barns. “We’ve even removed old corn silage pits carved into hillsides, including some that were made of concrete,” said Scott.

Once Scott removes structures and prepares the ground, it’s time to plant thousands of trees and native grasses like Big Bluegrass and Buffalo. At this point, the work has just begun.

“For at least two years, the property needs regular tending,” said Scott. “Weeds are constantly removed and grasses cut. Otherwise, they will choke out the new grass and saplings. It’s a never-ending battle between me and the weeds. I take it personal.”

From varmints to pheasants

The result of the hard work is a transformation of the land. Rusty nails, potted tin and barbed wire are replaced by a carpet of emerald meadows, wispy bulrushes and wildlife-protecting trees. For Scott, the greatest payoff is watching the land explode with wildlife. 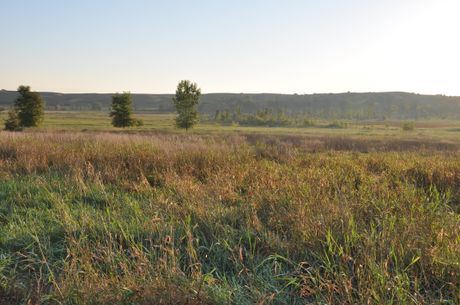 “Abandoned barns tend to attract ground-based predators like fox, mink, raccoons and coyote,” said Scott. “After restoration, the varmints move out and are replaced by pheasant, partridge, deer and turkey – animals that for the most part coexist with each other.”

On one restoration endeavor, a fish habitat was created after a waterway was plugged and a mini dam created. “Seeing a new pond teem with reeds, turtles and fish was very satisfying,” said Scott. “We’ve even observed waterfowl at our properties including ducks, geese, and bald and golden eagles.”

“Steve Scott is a great representation of conservation-minded landowners in South Dakota who are working to conserve the nation’s remaining tallgrass prairie ecosystems,” said Wiklund.

There’s no end in sight for restoring prairie lands, said Scott. Even though winters can be brutal with bone-chilling winds, he will heed the call of the wild as long as he has the time and money.

“It’s a part of my life. Our next project is 110 acres,” said Scott. “I expect we’ll plant upward of 30,000 trees on the parcel along with 70 acres of highly erodible soil being planted back into native grasses.

“I just hope that when my number is called, I’ll still be restoring the terrain that future generations will enjoy.”