After 55 years at Duke Energy, arborist Cordy Williamson knows one thing for sure: People love trees, and they’re willing to fight for them.

He’s seen homeowners file lawsuits, involve the police and stage vocal community protests to stop the utility from trimming their trees back from power lines.

“A lot of times, people just want to be heard,” Williamson said. “I try to find out what the customer thinks before I say anything. They want you to know what a particular tree means to them. I will listen. Sometimes, they’re just looking for someone to show a little bit of respect.”

As one of about 250 vegetation-management employees at Duke, Williamson, 74, travels the highways and back roads of South Carolina’s Pee Dee region in the northeastern part of the state, checking the work quality and safety of Duke Energy’s contract tree-trimming crews. You can find him in cities and towns like Florence, Sumter, Darlington and Hartsville. 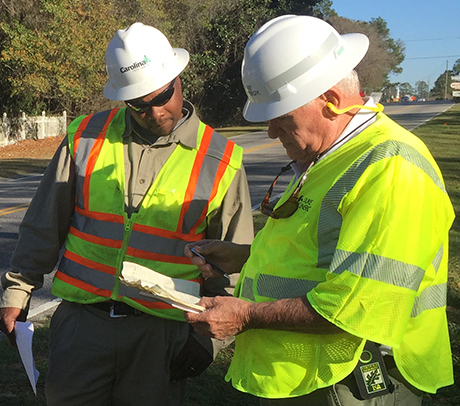 Duke Energy arborist Cordy Williamson (right) consults with a contractor. Williamson always advises tree trimmers to treat a customer’s tree like it was their own.

Williamson realizes trees hold meaning, mystery and magic for customers. That's why he’s made a conscious effort to explain, in the most gentle terms, when a tree must be pruned to prevent branches from falling on power lines. It’s the way he’s always done his job, even in the midst of recent controversies over Duke’s tree-trimming practices.

He’s philosophical about his work.

“Trees are a lot like people. Each has its own personality,” he said. “When I was a kid growing up, I used to remember hearing my granddaddy say that we only cut what we need. He instilled in me a great respect for what trees can provide.”

“When I wasn't working on the farm, I spent most of my time playing in the woods and I would often ask, ‘What makes a tree grow?’ From there grew a curiosity and love of trees,” Williamson added.

Putting his name and reputation out there

Often, he is called on when the tree crews work in highly sensitive areas where residents have protested. Williamson routinely puts his name and office phone number on the door hangers that alert residents about planned tree-trimming work.

When a resident calls him about a tree issue, he responds with the precision of a customer service representative, the expertise of an arborist and the patience of a counselor. His gentle manner and humble demeanor seem to soothe and calm the angriest property owners.

One of the simplest, most effective things to do, Williamson said, is to explain in detail how the cuts will be made before the tree crews show up and work begins. That way, the homeowner is not surprised.

To do this, Williamson will focus a laser pointer up in trees to highlight branches to be trimmed, showing the property owner exactly what will happen when the chain saws come out. In extremely sensitive situations, he’ll go a step further and oversee the tree work with the homeowner by his side.

It’s all about trust.

“Being an arborist gives you credibility,” he said. “If I say I’m an arborist, sometimes the problem just goes away.”

Williamson even makes house calls. One time, he visited an 80-year-old woman who was unhappy about the way Duke had trimmed her trees. When he first arrived at her house, she gave him a tough time, asking him if “he could sleep at night” cutting people’s trees. Undaunted, he sat down with her and talked with her about everything, from trees to life to neighbors. By the end of the afternoon, they had developed an understanding and a friendship.

On rare occasions, he also acts as a “fixer” when a property owner is extremely dissatisfied or when something goes wrong on a job. One such incident occurred in 2015. A local landscape company owner called him to look at some long-needle pine trees that had been damaged on his property. On a cool, misty morning, he drove Williamson down a narrow, winding road to show him just what had happened.

Brows furrowed, they both surveyed the power line and the damaged trees, some cut and some inadvertently damaged during the pruning work.

Trees are a lot like people. Each has its own personality. When I was a kid growing up, I used to remember hearing my granddaddy say that we only cut what we need. He instilled in me a great respect for what trees can provide.

After a lengthy pause, Williamson asked the man: “So what are you thinking? How can we make this right?”

The man simply asked him if the crew could replant the young trees that had been inadvertently knocked down. Williamson was happy to oblige.

The important thing is to treat people with respect, the Aynor, S.C., native said. That’s something he learned as a boy living on a farm alone with his mother. His father was absent.

A family friend bought his clothes throughout his childhood and a teacher, his school lunches. A neighborhood banker helped get him his first job at Duke Energy as a utility pole hole digger.

It was the kindness of others that got him through, Williamson remembers.

That’s a lesson he’s taught colleagues like Joanna McCutchen, who works with him as an arborist.

“I’m taking everything he says to heart,” she said. “There is so much Cordy can teach in other areas, like the right way to speak to people. There really is an art to it. You can always grow and learn, and it’s easy to do with someone like Cordy.”

Added Jay Bishop, another Duke arborist: “The day Cordy retires will be the hardest of my career. Working with him is a treasure.”