Always looking to the next challenge

Verida Sarratt may be quiet, but she can make a point. And her perseverance during her career paid off.

She worked her way up the ranks at Duke Energy’s McGuire Nuclear Station in Huntersville, N.C., proving herself at every level over 21 years, and in 2000 became the second black female senior nuclear operator at the company.

To become senior reactor operator, a supervisor who oversees the control room at a nuclear plant, Sarratt went through extensive training.

In the control room, she said she felt the scrutiny to make sure she could do the job, in part because her style was different than the operators who had military backgrounds and type-A personalities.

“I’m not a John Wayne type,” she said. “I wanted to be approachable, and that was a little different for them.”

Tom Simril remembers observing Sarratt during a practice exercise, noticing her ability to turn on and off her take-charge persona.

“It’s like you have a switch,” Sarratt remembered him saying. “You get into the mode of directing, leading and doing what you need to do, and when that’s over, you go back to normal.” 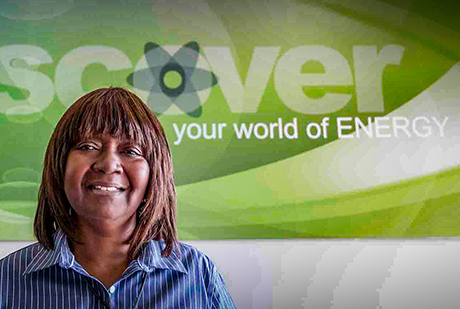 Simril, who is now vice president of Catawba Nuclear Station in York, S.C., promoted her to shift manager. He said she had a relatable leadership style that motivated people to want to excel. She allowed people to grow by giving them enough leeway to develop and coaching when necessary.

“She was very caring,” Simril said, “but at the same time very technically competent. It was a pretty easy decision to promote her.”

Her approachable style, she said, has helped her engage her team and empowered others to come to her with concerns. She worked as a senior reactor operator until 2013, when she was selected for a two-year position with the Institute of Nuclear Power Operations in which she traveled to nuclear plants around the country to evaluate their performance.

Currently, Sarratt is a manager in Duke Energy’s Nuclear Oversight department. She ensures compliance with nuclear standards and procedures, and it’s a different career path than she expected. Her plan was to become a dentist, but shortly after graduating from Johnson C. Smith University in Charlotte, N.C., she started working for Duke Energy in 1979.

She applied for a position in the environmental department, which aligned with her education in biology, but her performance on hiring tests showed an aptitude for operations. Although she grew up in Southport, N.C., where Duke Energy’s Brunswick Nuclear Plant is located, she didn’t know much about the industry.

“Once I understood what it was about,” she said, “I was always looking forward to the next thing, the next challenge.”

In the nearly 40 years that Sarratt has worked for the company, she has seen more women and minorities with interest in the operator positions, but not as many as she would like. She acknowledged that the demands of shift work can make it a difficult job for those with family obligations.

Sarratt’s advice to those trying to make it in a field where they’re different?

“First of all, be true to yourself,” she said. “Understand what’s required, and put forth the effort to show you’re capable. For me, the last thing I wanted to do was be the minority that went in and said, ‘Yeah, I can do it,’ and fail.”

Verida Sarratt and her team at the McGuire Nuclear Station in Huntersville, N.C.

Let others weigh in
“It doesn’t need to always be me coming in to save the day with a solution. If we can make an informed decision as a team, that’s the best. But, I did let them know if I need to make a quick decision, that decision is mine, and I will make it. If we have time to talk about it, that’s what I like to do.”

Connect with your co-workers
“I wasn’t looking like I was always on a mission. I took time to stop and talk to people unless there was something that called for urgency – then I could make that happen.”