Steve McGugan’s passion to help people in the midst of crisis didn’t diminish when he retired from the U.S. Army. Only the battlefield has changed.

Driven to run to the sound of the guns, as one of his generals said, and responding to urgent situations distinguished his 24 years in the Army, including 39 months in combat operations.

That drive led McGugan, a colonel, to a new career. He joined Duke Energy in January as director of emergency preparedness.

“Reacting to unknown events fits into what I’ve always done,” said McGugan. “You’re going out to help others at a time they need it the most. You feel like that’s your calling.”

Overseeing the company distribution emergency response in parts of six states – whether a storm or traffic accident – represents a homecoming for McGugan. A Durham, N.C., native, his family’s military ties date to World War I and inspired him to join ROTC while attending N.C. State University in Raleigh. He was commissioned into regular Army duty in 1990 and served in nine states and several war zones over nearly 25 years.

Among his combat assignments: In response to Iraq’s invasion and occupation of Kuwait, he led platoon combat operations in Desert Shield/Storm. He also planned and led several classified operations during Operation Enduring Freedom in Afghanistan and Operation Iraqi Freedom in Iraq while assigned to special operations units. 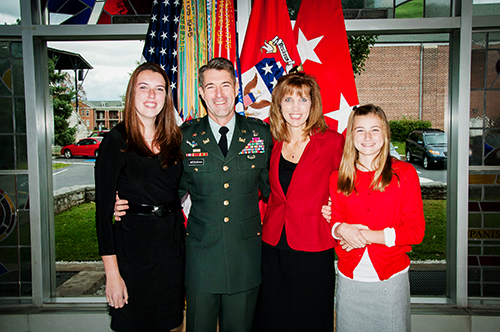 At the close of 2014, he retired from the Army. But he wasn’t nearly ready to “retire.” He wanted to come back home to the Raleigh area with his wife and two daughters, in part to find a new opportunity in the flourishing Triangle job market. Funny how things work: Duke Energy posted the emergency preparedness opening in October 2016 – the weekend Hurricane Matthew struck eastern North Carolina.

“As soon as I saw the posting,” McGugan recalled, “I said, ‘That’s something I’ve always wanted to do.’”

Sandy Moonert of the nonprofit Enable America alerted McGugan to the opportunity. Based in Raleigh, she had gotten to know him through the organization, which helps the disabled, wounded warriors and other veterans find meaningful work.

Duke Energy provides financial support for Enable America to put on eight job seeker workshops a year at North Carolina military bases. With “Emergency Preparedness” in the job title, Moonert knew McGugan would be a great fit and that his hiring could help open the Duke Energy door for other veterans. 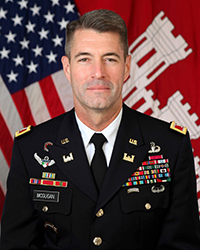 “Steve definitely has that personal presence, that leadership ability,” Moonert said. “He’s definitely a motivator. It’s ingrained in him. As he succeeds, he wants to reach back and help veterans achieve that same success.”

Charlie Spicer, retired from the Army after 20 years and now Duke Energy’s lead military recruiter, said McGugan’s hiring is part of a promising trend in the company. In the first six months of 2017, Duke Energy hired 118 veterans. That brings the number of vets in the company to 2,000, 7 percent of the workforce. Duke recently hired a second military recruiter – Charlotte-based Navy veteran Jaymie Glaspie. Among the 50 states, North Carolina ranks No. 8 in number of military veterans.

Spicer said veterans bring to Duke Energy qualities the company seeks: the ability to work on a team; a focus on safety that’s crucial to success in both workplaces; a trainability that allows veterans to follow orders; and the belief you are serving something greater than yourself. 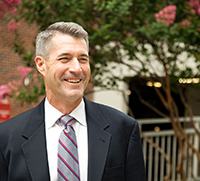 There’s another trait that translates from military life to Duke Energy life, McGugan said: a hunger to be in the middle of the action and an understanding, learned under fire, that the best response is the one that’s carefully planned before stuff happens. This comes from an Army officer who was part of the emergency response to Hurricane Andrew in south Florida in 1992 and Hurricane Sandy in New York in 2012.

McGugan’s employer has changed, but he admits his heart still races with the mission: “In times of crisis, being calm and helping as many people as possible.”

Family: Wife, Tammy, a school nurse; two daughters, Megan, 24, a pharmacist, and Amy, 17, a rising junior at Ravenscroft School in Raleigh. “The whole family does some type of serving others,” he said.

Background: A Durham native and N.C. State University graduate, he rose to the rank of colonel in an Army career that spanned nearly 25 years. That includes 39 months in combat operations. He joined Duke Energy in January 2017.

Away from work: He enjoys watching his daughters play sports and taking his 22-foot boat on Kerr Lake near the North Carolina-Virginia border. His wife said he watches “Heartbreak Ridge,” Clint Eastwood’s 1986 Marine movie, a little too much.

Duke Energy and the military

Enable America: The nonprofit (www.enableamerica.org) puts on job seeker workshops on North Carolina military bases, with help from Duke Energy. The workshops offer help writing resumes, marketing oneself through LinkedIn and the like. Reach Sandy Moonert at 919.345.9933 or sandra.moonert@enableamerica.org.