A sweet surprise for a couple in their 90s

For Duke Energy lineman apprentice Shawn Tillis, rest and normalcy have erased the exhaustion of restoring power after Hurricane Irma drenched and devastated much of Florida five months ago. But one memory remains strong.

When Tillis thinks about Hurricane Irma, he remembers Mary Schwartz, a woman with an “angelic face.”

Mary Schwartz and her husband, Larry, both in their 90s, live in a modest house along the Rainbow River in Dunnellon, Fla. Larry Schwartz takes care of his wife of more than 70 years. She is confined to an electric bed. 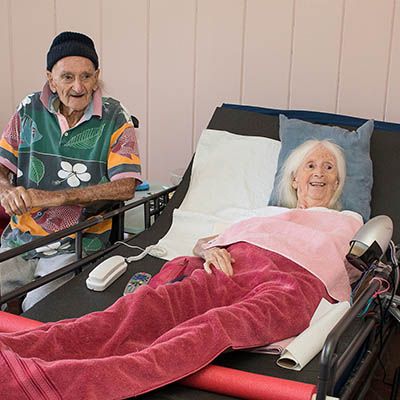 He frequently asks her if she is hungry or thirsty. He rubs lotion on her feet. His right hand brushes her forehead to sweep her white hair from her face. He turns on a space heater to ensure she stays warm. He does the laundry, makes sure her bedding is clean and cooks too.

Schwartz was feeding his wife in an upright position in bed when Hurricane Irma knocked out their power in September. The bed trapped her foot, and she was not able to get out of the bed for more than a day.

“I was afraid to get out of the bed because it was too high and I could fall,” Mary Schwartz said.

Larry Schwartz flagged down line crews working near his neighborhood and asked them for help.

Tillis said he imagined his grandmother in that position and knew he had to do something.

“We couldn’t get their power back on for at least eight more hours, but we were able to get the bed lowered,” Tillis said. “It was the least we could do to help make her more comfortable.”

For the love of his community, Tillis wanted to do something nice for the couple to thank them for their “positive energy” on that bleak September day. 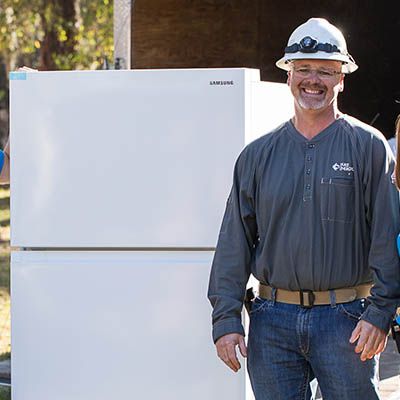 Shawn Tillis and the refrigerator for the Schwartzes.

"I wanted to make things a little easier for them, a little better,” he said, “to put a smile on their faces.”

So Tillis contacted Duke Energy’s Community Relations and Corporate Communications teams to see if the company could help. They met with the couple and asked how Duke Energy could help them. After considering several ideas, they decided to surprise them with 10 packages filled with necessities – cotton shirts, sheets and towels. They brought Mary Schwartz her favorite ice cream cake and arranged for a home improvement store to deliver a new ENERGY STAR refrigerator.

“You are good-hearted people,” Tillis said while giving Mary Schwartz a bouquet of flowers. “Restoring power can be stressful. You were a breath of fresh air – just so grateful and patient, and I want to thank you.”

“You’ve gone the extra mile,” Larry Schwartz said, “and we appreciate that.”