A luxurious nest for eagles in Indiana

Sustainability at Subaru includes creating a home for bald eagles at plant in Lafayette, Ind.

Employees at the Subaru auto plant in Lafayette, Ind., are treated to frequent sightings of eagles that are drawn to the site’s ponds. The plant is on a natural flight path for migrating bald eagles, but the raptors seemed to fly by without ever considering moving in.

So Subaru officials talked with wildlife biologists to learn what bald eagles look for in a place to settle down and raise a family. 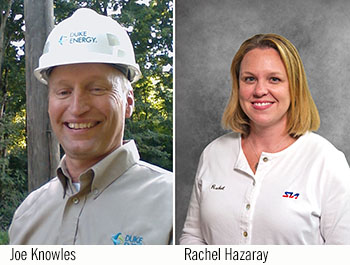 When it comes to housing, eagles want a penthouse suite. And that was the problem with the Subaru site from an eagle’s perspective – a lack of old-growth trees. Nesting platforms were an alternative, and Subaru and its energy company, Duke Energy, collaborated to build two 60-foot-tall perches in June.

“Duke had a project on the Subaru site where we were temporarily using large wood poles that would be ideal for the nesting platforms,” said Joe Knowles, a Duke Energy account executive. “We relocated the poles to the spots selected by Subaru and the American Eagle Foundation.”

It was the ideal joint project for Duke Energy and Subaru. “Duke shares a commitment to the environment and wildlife with Subaru,” said Knowles, “and we’re also accomplished in the installation of large wood poles with equipment mounted on them.”

The platforms had to be installed in summer so they would be weathered by the time eagles start looking for nesting sites in January and February. (Eagles prefer that “lived-in” look over new construction.) The early signs are promising. Knowles said an eagle was seen visiting the platform in late August.

“Hopefully that's a good sign for the 2017 breeding season,” he said.

The nesting platforms were installed by Duke Energy transmission crews in an awkward location – for humans. The poles are taller than they need to be, solid and already have branches and twigs assembled to encourage eagles to swoop down and move in.

“We gave the eagles,” Knowles said, “a head start.”

In addition to old-growth trees, a fishing source is essential. Karen Wilbur of the American Eagle Foundation in Pigeon Forge, Tenn., said an adult bald eagle’s diet is 80 percent fish. Fortunately, the Subaru plant has plenty of ponds on its 832-acre property.

Subaru is also a desirable ZIP code for all kinds of wildlife. It’s designated a Backyard Wildlife Habitat by the National Wildlife Federation. Part of the plant’s acreage is grassland, said Rachel Hazaray, Subaru assistant senior manager for legal and corporate social responsibility. “That means it looks as it would’ve looked before humans ever settled the land.”

Along with wildflower meadows, there are plenty of rabbits and rodents – which means it’s a rich hunting ground for birds of prey. Hazaray said, “The circle of life is abundantly apparent here.”

Sustainability is a way of life

The Subaru plant, which produces 310,000 vehicles a year, is a zero-landfill facility, and attracting eagles is just the latest of Subaru’s environmental initiatives. “Being environmentally conscious,” Hazaray said, “is a way of life for us.”

Bald eagles mate for life and return to the same nest year after year. Since eagles can live up to 39 years in the wild, Subaru associates may get to watch their raptor neighbors grow to a ripe, old age. 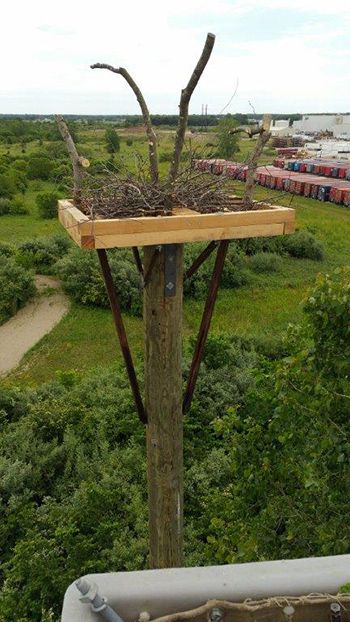 Bald eagles build the largest nests of any North American bird. The nests can be 8 feet across and 5 feet deep. They need to be that big because adult eagles are enormous. Females (which are larger than males) can have a wing span of 8 feet.

Eaglets are fully grown at just 12 weeks. And if eagle parents have two or three babies, even a super-size nest can start to feel crowded. It’s a good thing eagle kids leave home at about 14 weeks.

If eagles decide to settle down here, humans can watch them 24/7. Subaru plans to install webcams for internet viewing. Once the cameras are operational and eagles have moved in, you can watch at subaru-sia.com.

Subaru and Duke Energy have rolled out a raptor’s version of a red carpet. Now, they wait … and hope that America’s national symbol will decide Lafayette, Ind., is a good place to call home.