A little town defends itself against big storms

As the waters of the Lumber and Little Pee Dee rivers crested their banks, spilling into the streets and yards of Nichols, S.C., Mayor Lawson Battle began directing traffic away from flooded parts of town. 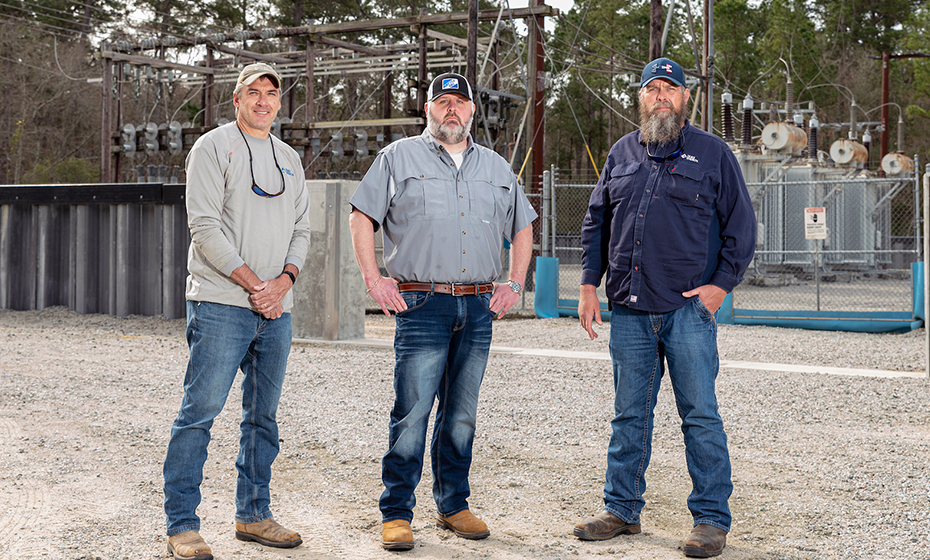 Battle watched in disbelief as the water rose, driven downstream after Hurricane Matthew dumped up to 19 inches of rain across the coastal regions of the Carolinas in October 2016.

“We were waking people up in the middle of the night who didn’t know how bad it was,” Battle said. “We rescued 148 people that night.”

Few were spared. Every business, every church and 98% of homes were flooded, Battle said. Duke Energy’s substation was flooded. Even if wiring in homes and businesses wasn’t compromised by the water – and much of it was – people remained without power for several days until Duke Energy technicians got the substation up and running.

And then two years later, almost unbelievably, Hurricane Florence wreaked even worse havoc, dropping more than 20 inches of rain near Nichols as it crawled across northeastern South Carolina and even more rain across parts of North Carolina. Once again, businesses, churches, homes – and the substation – were flooded.

Clearly, the pattern had to change.

Nichols, which had close to 400 residents then but now has fewer than 300, is nestled near the confluence of the Lumber and Pee Dee rivers. Despite some talk of moving the entire community to higher ground and despite the fact that some families moved away, most folks were determined to stay in this quiet corner near the coast.

Battle is at least the fourth generation of his family to live in Nichols. He runs the family business, Battle Oil Co. At the start of hurricane season, which begins June 1, he tracks storms forming in the Atlantic Ocean. The memories of hurricanes Matthew and Florence are still so fresh and raw that he can’t help but worry about his hometown. 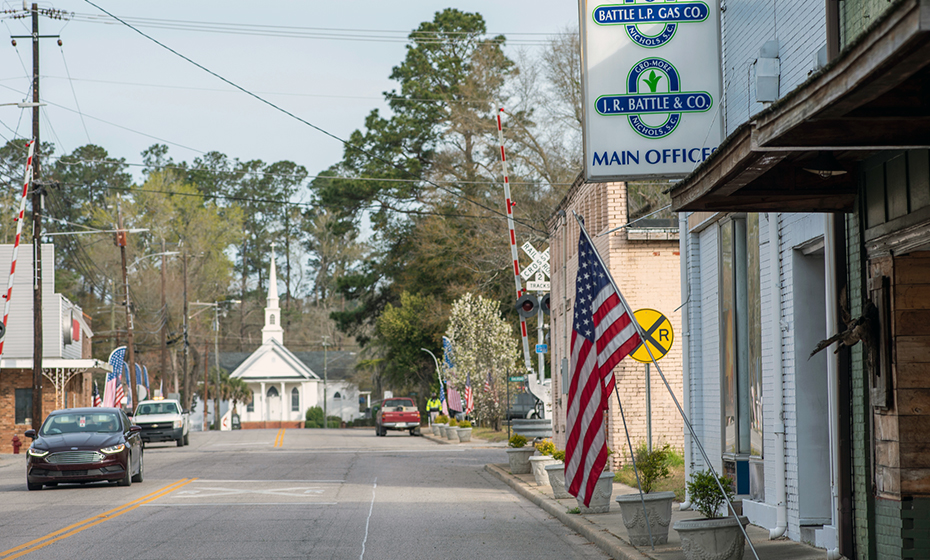 Nichols, in the Pee Dee region of northeastern South Carolina, has about 300 residents.

Duke Energy is also thinking about the impact of storms in the communities it serves and is strengthening its power grid against floods like Nichols experienced. The company has completed many improvements across the Carolinas to better resist the effects of hurricanes, floods and other extreme weather. Improvements include replacing wooden transmission poles with steel poles and installing smart equipment and self-healing technology that can detect power outages and restore service faster.

With lessons learned from back-to-back historic floods across eastern North Carolina and the Pee Dee region of South Carolina, the company focused on substations and essential equipment in vulnerable, flood-prone areas.

“After Matthew, Duke Energy formed a team to rank and prioritize the substations in these flooding events,” said Charlie Sandifer, regional engineer for the company's southern district. “Once that team identified the stations that were susceptible to flooding, then we formed a second team, which was a flood protection team.”

Carlton McKay, a senior substation technician in the Pee Dee region, said crews installed temporary flood barriers around the Nichols substation and several other similar flood-prone stations in 2018 ahead of Hurricane Florence. The barriers consisted of 50-foot-long cylinders filled with water. They worked, but as Hurricane Florence unleashed its fury, McKay said floodwaters crested over the top of the temporary dam. 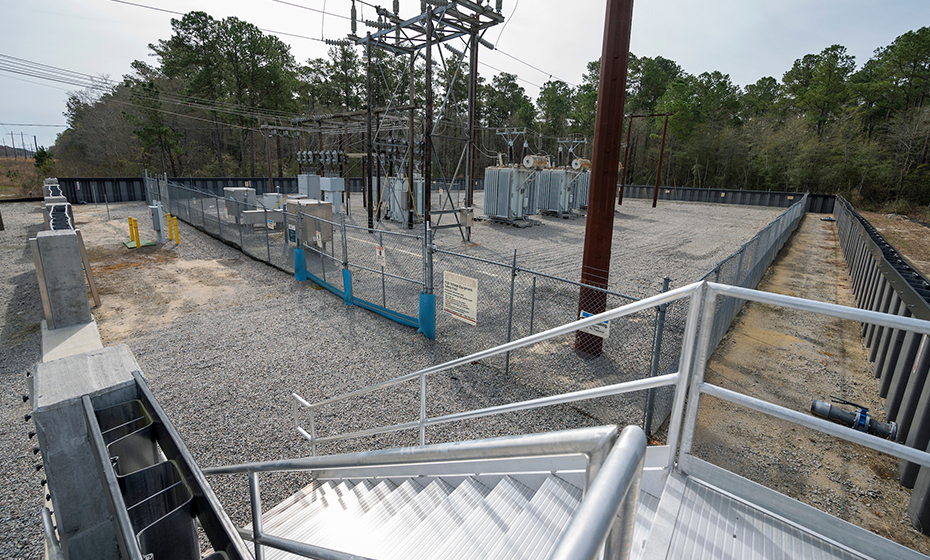 Duke Energy built barriers of reinforced high-density polyethylene around most of the perimeter of the 3,600-square-foot substation. They stand 6 feet above ground and extend 16 feet underground.

Duke Energy’s flood protection team realized they needed to implement a permanent solution – and do it quickly. The substation in Nichols powers the town and the communities of Lake View and Green Sea.

After researching options and visiting Atlantic City, N.J., which built barriers around its water treatment facility, they came up with a solution that Sandifer and McKay believe will protect the substation if catastrophic flooding occurs again – and meteorologists think it might.

Duke Energy constructed barriers made of reinforced high-density polyethylene around most of the perimeter of the 3,600-square-foot substation in Nichols. They stand 6 feet above ground and extend 16 feet underground to further reinforce the wall. The project includes removable aluminum access gates as well as pumps inside the walled-off area to drain away rainwater. They also installed stairs over the wall to allow technicians to safely get inside if approaching by boat.

“We were looking for a flood wall that would give us adequate protection but at the same time have low maintenance and have longevity,” Sandifer said. “Our desire is to stay ahead of the floodwaters.” 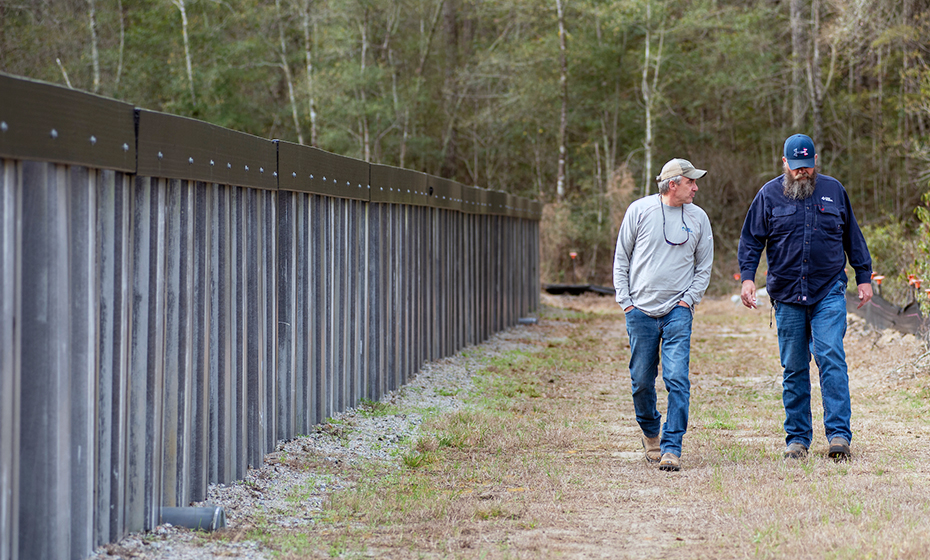 The underground walls both anchor the structure and block seepage. In North Carolina, Duke Energy installed similar flood barriers around substations in Lumberton, Wallace (at two substations there), Newport, Grifton and Goldsboro. The walls range from 6 feet to 8 feet high, with another 12 feet to 25 feet underground, depending on projected flood levels.

Sandee Rogers, town administrator for Nichols, praised Duke Energy for working with the town to get power restored as quickly as possible following the two historic storms. Now, with the “first-class wall” around the substation, she said, residents could have their power restored much quicker if the worst should happen again.

“The quicker you get power back on, the quicker you can start drying out,” Mayor Battle agreed. “They really stepped up, spent money and put in a state-of-the-art system which will be very, very special for the whole community – not just Nichols. It’s a blessing.”

How Duke Energy is improving the grid

In addition to the permanent barrier walls installed around substations, other improvements to the electric grid include upgrading poles and wires, placing outage-prone lines underground, strengthening the grid against severe weather, and installing self-healing technology that detects power outages and quickly reroutes service to other lines to restore power faster.