A lineman in the family? Yes, three

This Lineman Appreciation Day, meet Jeff Caison and his sons, Seth and Drew, who followed their dad to a life of service

Seth Caison will take over the Duke Energy instagram on April 18 to celebrate National Lineman Appreciation Day. Follow @duke_energy for a behind-the-scenes look at a lineman's day.

Dozens of children cheered for their dads who were competing at the Carolinas East Lineman’s Rodeo, but, for the first time, Seth Caison was competing with his dad.

Jeff Caison and his sons Seth, 26, and Drew, 23, are all linemen for Duke Energy. Seth, who grew up playing baseball, football and basketball with his dad coaching from the sidelines, said he was excited to finally be on the same team. Seth works in Matthews, N.C., but made the 2 hour and 30 minute trip to compete at his dad’s rodeo.

“He’ll still be hollering at me,” Seth said. “It’ll be like old times.”

At rodeos across the country, linemen compete in events based on job-related skills: climbing poles, rescuing a life-size dummy, and solving problems quickly and safely. The top three performers at regional rodeos, like the Carolinas East event April 8 in New Hill, N.C., qualify for the International Lineman’s Rodeo in Kansas City in October. 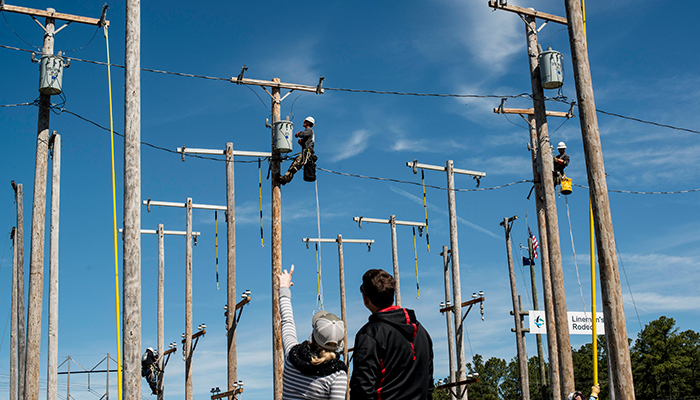 Jeff has been a lineman in Burlington, N.C., for 27 years and went to the International competition once as a judge and twice as an alternate. Drew, who has worked for Duke Energy for two years in Raleigh, came close to qualifying for International last year – missing third place by a sliver.

“Drew will probably wind up being a better lineman than me,” Seth said. “He picked up on it really quickly.”

In an open field, about 50 power poles stand ready for competitors. Linemen participate in four events: speed climbing, hurt man rescue and two mystery events. While Jeff and Seth were competing on a three-person team in a division for experienced linemen, Drew was competing across the field in the entry-level Apprentice division.

The linemen drag a cart full of tools and equipment to each event. Before entering the roped-off competition area, they observe the action. 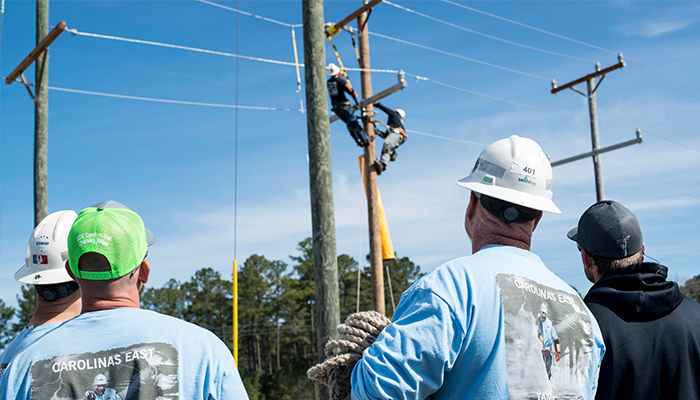 “A lot of these guys have been to Kansas City,” Seth said. “You can learn a lot by just watching them.”

When it was their turn to compete, Jeff, Seth and their third teammate, Jayson Vaughn, worked together so quickly and smoothly that it seemed choreographed. In a mystery event, where there is little time to strategize, the team earned a perfect score as they speedily prepared equipment and climbed the pole to check a transformer.

Like Seth expected, Jeff coached them from the ground: “Clear that stick!” or “Walk around!” As he yelled, Seth and Vaughn would move with the long, insulated tool used to fix equipment or shuffle around the power pole to get a better angle.

“It’s like sports,” Jeff said. “The more you practice, the better you are.” 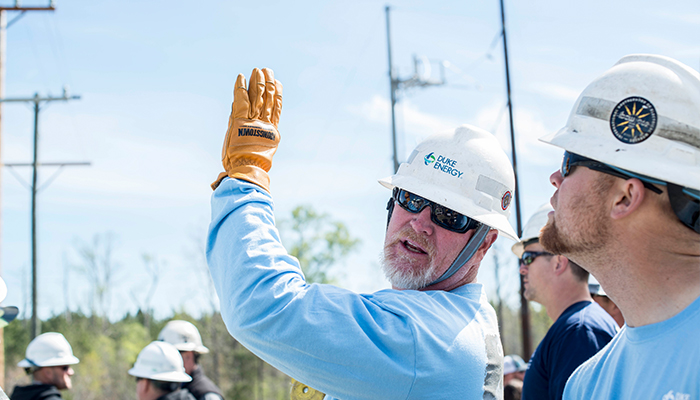 The rodeo is an opportunity for linemen to improve, but it’s also a time for families to see what their linemen do at work. Jeff became a lineman before his sons were born, but it wasn’t until Seth was in college watching his dad compete at a rodeo that he considered the career for himself.

Seth studied sociology and criminal justice at Greensboro College, where he played baseball, and knew he wanted a job that wasn’t at a desk. As a college senior filling out job applications for the state Highway Patrol, sheriff’s offices and FBI over Christmas break, Jeff said, “You know, Duke Energy is hiring linemen.” 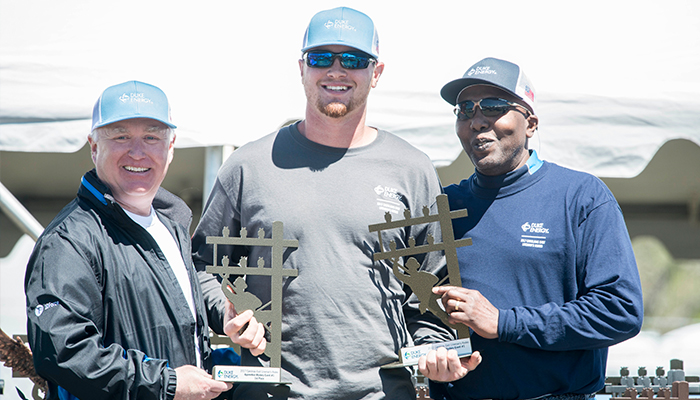 That was four years ago, and Seth competed in his first rodeo less than three months after he got the job. He said he sees a lot of similarities between baseball and line work – every day is different and, most importantly, he’s part of a team.

“It’s fun. It’s different every time you leave the house,” Seth said. “I talk to my dad and my brother, and they’re always seeing something different—something cool—so now I get to hear about different things all the time, too.”

And like baseball, sometimes the team comes close to winning. Seth’s team finished sixth in their division, and Drew finished fourth – one point from third place and a chance to compete in Kansas City.

Learn more about what it takes and how you can get started on a new career here.