Who doesn’t love a parade? Nearly everyone is a sucker for the boisterous, colorful spectacle of floats, one after another, gliding down a people-lined boulevard. Since 1927, Nashville has embraced the city’s annual Christmas parade. “The entire city takes great pride in it,” said Stephen Francescon, Piedmont Natural Gas community relations manager. Piedmont Natural Gas began sponsoring the event in 1952.

1. Star power. NHL veteran Mike Fisher (and husband of country superstar Carrie Underwood) is this year’s grand marshal. Fisher has been a hometown boy since he joined the NHL Nashville Predators in 2011.

2. Santa and his reindeer are “flying” in. The Nissan float that’s been a mega-hit before is back again. Santa himself rides on the float, and it appears he and his sleigh are magically being pulled by eight flying reindeer. 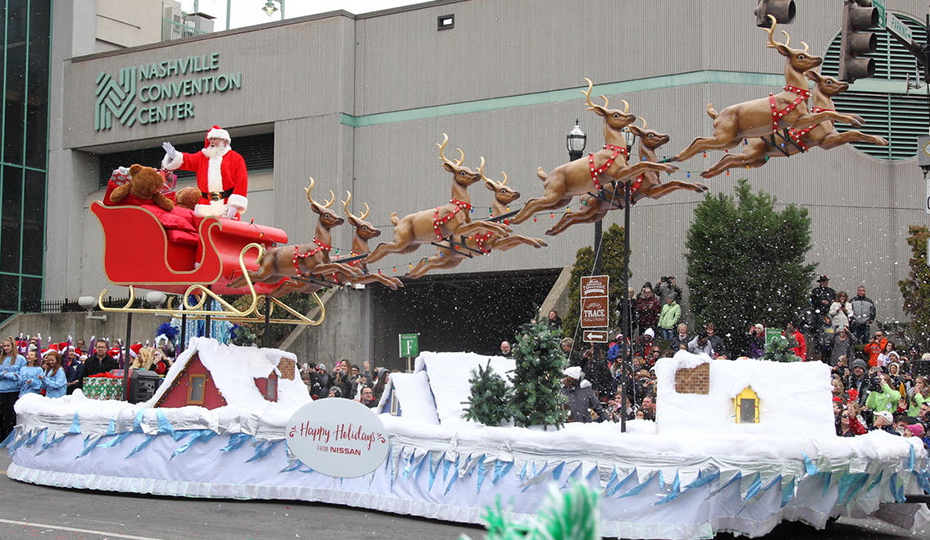 3. Piedmont Natural Gas is pulling out all the stops. Until last year, this was a small-town-style parade with homemade floats. But last year, Piedmont Natural Gas tapped JM Best Entertainment of Orlando to turn the parade into a lavish, professional production. This is the company that produces the Magnificent Mile Lights Festival in Chicago, the National Cherry Blossom Festival Parade in Washington, D.C., and many more. Company president John Best said to expect marching bands, floats and giant helium balloons – some as tall as 30 feet. Tweety Bird, Twinkles the Snowman and 15 others will make their way down Broadway.

4. No matter how big it gets, it’s still a hometown parade. The parade is distinctively Nashville. From country music stars – many of whom live in and around country music’s mecca – to a float that honors the Nashville Zoo – there’s no mistaking that this parade belongs to Tennessee’s capital city. “We’ve kept the parade homey,” said Best. Francescon added: “We raised the bar, but there’s still a small-town feel to this parade.”

5. It’s the season of giving. Proceeds from the parade benefit the Monroe Carell Jr. Children’s Hospital at Vanderbilt (a total of $50,000 last year) and Piedmont’s Share the Warmth program, which helps low-income people pay their energy bills. The full 100 percent of float entry fees goes to Share the Warmth.

How you can watch the parade